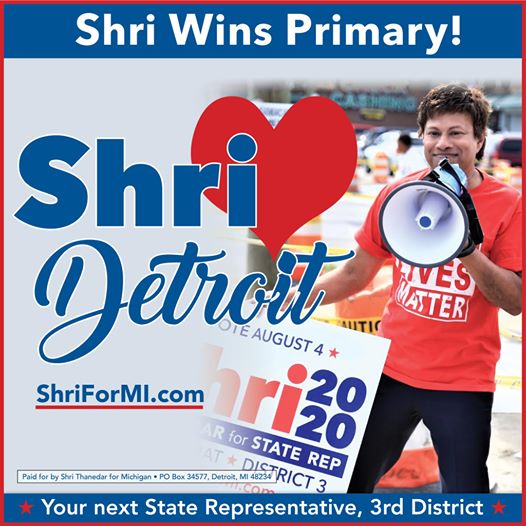 You might recall his bid for governor in 2018, and his playful, sometimes goofy TV commercials.

Now, multimillionaire businessman Shri Thanedar, 65,  is a winner, and looks to be heading to Lansing as a freshman state representative.

Thandedar won the Democratic race in Tuesday's primary for the 3rd state House District, which is bounded by Eight Mile Road on the north and McNichols Road on the south, and Livernois Avenue on the west and Gratiot Avenue on the east. State Rep. Wendell Byrd wasn't allowed to run again for the seat because of term limits.

He faces off with a Republican opponent in November, but because the district is heavily Democratic, it's assumed he'll win.

"I think my story, my life story, resonated well with Detroit," Thanedar tells Metro Times' Lee DeVito. "You know, Detroit has a lots of ups and downs, lots of successes and failures and comebacks, and my life is no different."

Thanedar's rags-to-riches story, as told in his self-published 2008 memoir "The Blue Suitcase: Tragedy and Triumph in an Immigrant's Life," recounts how he grew up impoverished in India and eventually built up two pharmaceutical companies, one that went bankrupt, and one that he sold in 2016, DeVito writes.