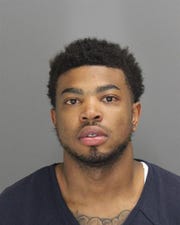 A 23-year-old Pontiac man who allegedly sex-trafficked at least nine women attending college in Oakland County has been charged with a slew of crimes.

The Michigan Attorney General's Office on Tuesday announced Dallas Jordan-King faces seven felonies tied to what they say was a commercial prostitution ring that relied on forced labor.

Jordan-King operated in Auburn Hills, Pontiac, Madison Heights and elsewhere for 15 months in 2018-19, the office said.

The investigation found he would befriend numerous young college-age females and groom them to have sex for profit.