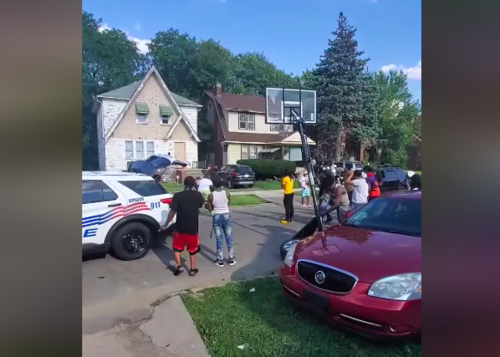 You can put one in the win column for police-community relations and one in the L for preventing the spread of Covid-19.

A Detroit police officer pleasantly surprised a group of men who blocked a neighborhood street for basketball Sunday when he joined their game instead of breaking it up. But amid the two brief bouts of one-on-one play, neither he nor his opponents and onlookers wore masks or practiced distancing.

The fact that Gov. Gretchen Whitmer has mandated people stay six feet apart from those outside their households — an offense for which Detroit police have issued more than 2,600 tickets that carry up to $1,000 fines — appears lost on viewers. Facebook video of the pickup game has been shared more than 130 times, with most commenters expressing approval. It is, afterall, an olive branch of sorts in a period of turmoil between Detroit police and some residents. Officers have shot four men in the past month, killing three, with Chief James Craig blaming the high number of shootings on suspects "emboldened" by "anti-police rhetoric."

"This right here is how it should be! Coming together, having each others backs and having fun!! Let's do it more often," one woman said of the video.

"This is community policing," said another commenter.

Jerald Jackson, who posted the clip, says officers were in the area, near Russell Woods on the west side, on a report of shots fired.

"There is a difference between our police and other police," he's heard saying in the background. "The irony is this shit could have been way different. ... Give that man a Nobel Peace Prize."

Just three of more than 40 comments note the lack of distance, with one saying, "but, but, the pandemic."

The Detroit Police Department did not respond to a request for comment on the officer's actions. When asked whether it continues to issue tickets for social distancing violations, spokeswoman Sergeant Nicole Kirkwood said, "We still encourage social distancing and also provide masks to those who needs them."

More than 500 officers were sidelined by a Covid-19 outbreak within the department this spring.