One aerial adversary survived to soar again over Lake Michigan.

Mid-August cleverness takes wing in Lansing at the Michigan Department of Environment, Great Lakes and Energy, where a public information officer has fun with a Marquette district field report.

The inspired writer turns a state property loss into a whimsical narrative about an aerial drama near Escanaba. The tale, posted Thursday, begins this way:

An Upper Peninsula bald eagle launched an airborne attack on a drone operated by a Michigan Department of Environment, Great Lakes, and Energy (EGLE) pilot last month, tearing off a propeller and sending the aircraft to the bottom of Lake Michigan.

A circling predator's eagle eyes, unable to tell a quad copter from a tasty gull, attacked the whirlybird. The state agency stylist, whose identity we guess below, uses tabloid-style newswriting to lift this saga above the mundane:

King had completed about seven minutes of the mapping flight — his fourth of the day in the area — when satellite reception got spotty. He pressed the "Go Home" recall button. The drone dutifully turned, reacquiring a strong satellite feed.

King was watching his video screen as the drone beelined for home, but suddenly it began twirling furiously. "It was like a really bad rollercoaster ride," said King. When he looked up, the drone was gone, and an eagle was flying away. A nearby couple, whose pastimes include watching the local eagles attack seagulls and other birds, later confirmed they saw the eagle strike something but were surprised to learn it was a drone. Both King and the couple said the eagle appeared uninjured as it flew from the scene of the crime.

The couple joined King in a search, but hours of scouring the shoreline were fruitless. Several days later, armed with telemetric data from the flight that pinpointed exactly where the drone hit the lake — 150 feet offshore in four feet of water – EGLE Unmanned Aircraft Systems coordinator Arthur Ostaszewski brought a kayak and snorkeling gear to the search.

With near-zero visibility in water darkened by tannin, Ostaszewski scrapped the snorkel and instead walked a grid pattern, shuffling his feet for two hours in soft muck ("like I was playing Battleship and wanted to cover the entire board"). He too was luckless.

The $950 Phantom 4 Pro Advanced will be replaced, says the vivid news release. The storyteller uses flight data to recount "the drone's final moments," describes it as "the rogue eagle" and speculates that "maybe it did not like its name being misspelled." 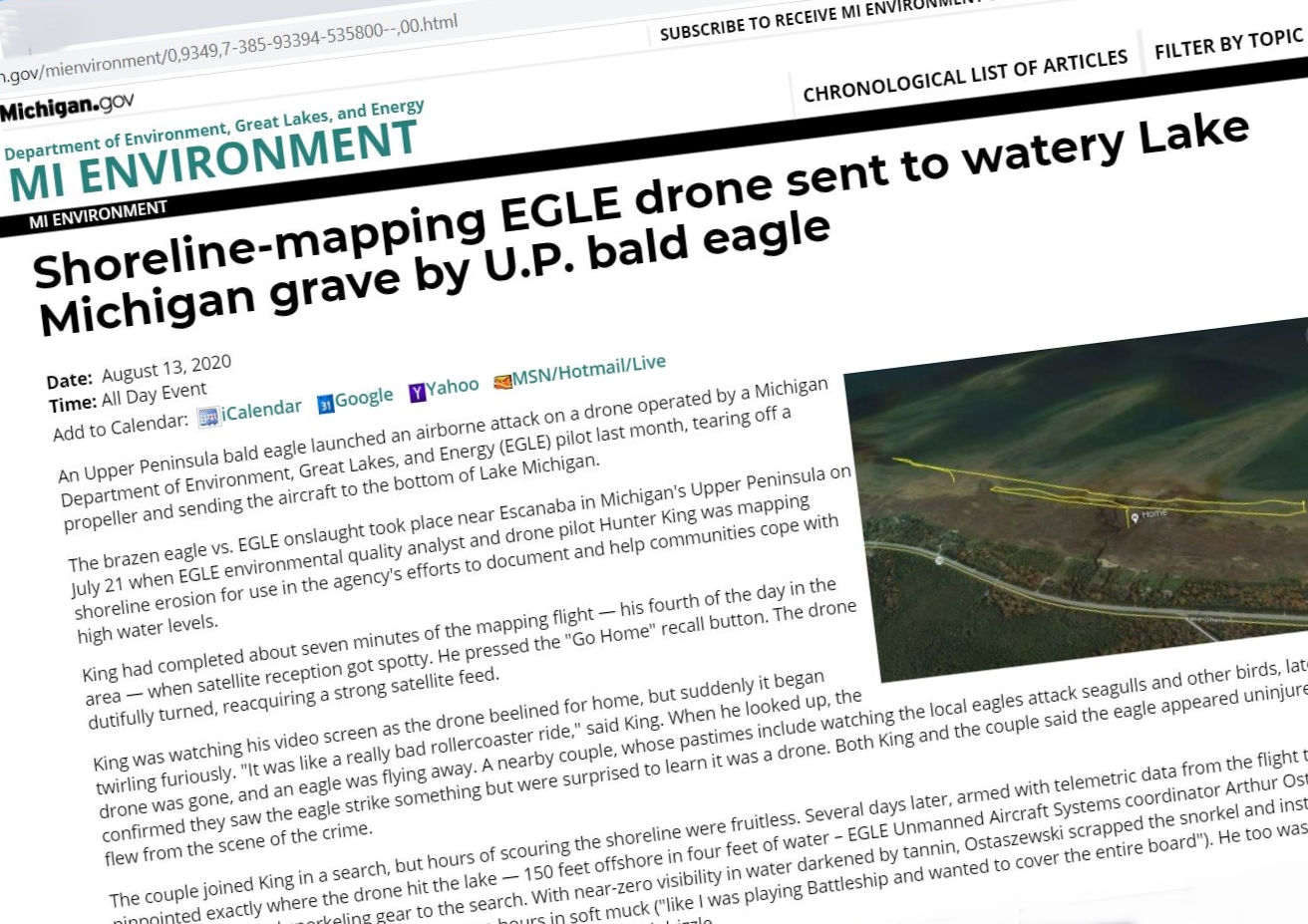 The American bald eagle had a clear size advantage. Its average wingspan is six to seven feet, compared to 14 inches for the Phantom. The drone weighs three pounds, while adult male eagles can reach 10 pounds and females typically are a few pounds more.

The state department's well-told story has a fitting kicker: "Nature is a cruel and unforgiving mistress."

Our sense is that Nick Assendelft, a longtime former newsman who joined EGLE in 2017 as a public information officer, deserves a feather in his cap for summer playfulness that includes these facts: