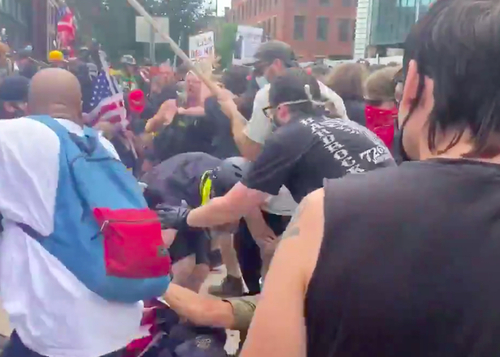 A skirmish between the alt-right group Proud Boys and counterprotesters turned violent in Kalamazoo Saturday.

It wasn't a large or widespread scuffle at Arcrobinadia Creek Festival Place, The Detroit News reports, but fist-fighting broke out between the groups, which planned simultaneous marches:

The Proud Boys had planned a rally and counter-protesters, described as the anti-fascist leftist group antifa by protesters, staged their own event in the area at the same time, according to local media reports.

At about 2 p.m. Saturday, members of the Proud Boys marched past antifa members armed with assault weapons. Fighting erupted with combatants wielding sticks and batons and throwing things.

...Some fist fights occurred before police arrived and ordered the crowds to leave. Robinson reported that some of the Proud Boys also used pepper spray on people.

Some of the Proud Boys carried American or Trump 2020 flags. Police broke up the fighters and arrested reporter Samuel J. Robinson of MLive. His videos of the event are at his Twitter feed.

Here’s another scene from today: The two sides were clashing before a member of the Proud Boy’s unleashed pepper spray at the crowd, gets hit in the head with bag. pic.twitter.com/b399gID4P9