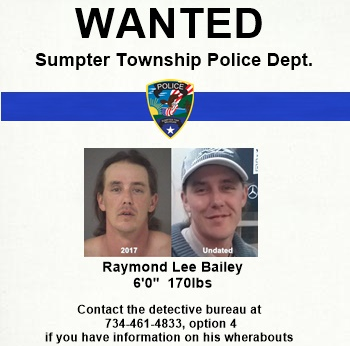 Raymond Lee Bailey, 37, turned himself in to the Bay County Sheriff's Office, the Sumpter Township Police announced in a Facebook post at 10:20 p.m. Sunday. "He will be transferred into our custody shortly," it adds.

Authorities were hunting for a suspect in a quadruple slaying Saturday in Sumpter Township in western Wayne County, about 35 miles outside Detroit.

Police responded to a home in the 24000 block of Martinsville Road and found two men and two women in their 30 who had been shot, according to a Sumpter Township Police press release posted on Facebook.

Detectives identify the suspect as Raymond Lee Bailey, 37, of Sumpter Township, an ex-boyfriend of one of the female victims.

Police received information that he fled to northern Michigan, possibly the Upper Peninsula. His car was found abanoned near Bay City.

Bailey allegedly confessed to the killings via calls and texts to several people, authorities said. Anyone with information on his whereabouts is asked to contact the Sumpter Township detectives at (734) 461-4833, option 4.