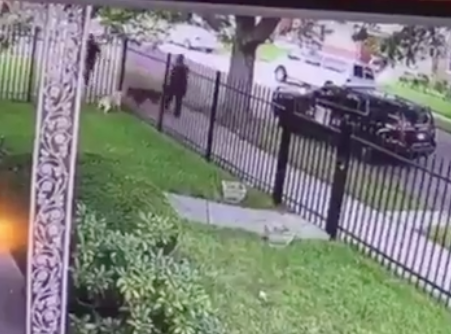 Detroit Police have determined that an officer was justified in fatally shooting a dog in the head on the east side Aug. 3 after it attacked a police dog.

The incident happened as police were searching neighborhood yards for a suspect's weapon, Miriam Marini of the Detroit Free Press reports. Department officials say the officer acted according to protocol. The dog was believed to be a pit bull.

Ring doorbell footage of the incident, which has since gone viral, shows a Detroit officer walking along a residential sidewalk with a K-9 officer on a leash when a white medium-sized dog runs up to its home's front gate. The two dogs run together on opposite sides of the fence, then the K-9 approaches the fence and the white dog latches itself onto the K-9's snout between the wrought iron fence rails.

The officer is then seen reaching for her gun and firing a single fatal shot at the white dog's head...

“Her partner (K-9) was being attacked and we demand that our officers protect not only themselves but their partners and citizens. At this point it was a clear and present danger; her dog was being viciously harmed," said Police Commander Darin Szilagyi in an interview Friday. "It's unfortunate it came to this. We don't like to see any animal hurt.”

A Detroit police officer shot someone’s dog that posed no threat inside its own fence after he lost control of his own K9.

This officer should be held accountable. He should be fired and prosecuted. pic.twitter.com/28D4TuiMmy