The Detroit Lions cancelled preseason practice Tuesday afternoon so players could talk about a topic much more pressing than football.

That subject is the need for police reforms, a life-and-death issue heightened most recently in Kenosha, Wis. Jacob Blake, a 29-year-old Black resident, is in stable condition after being shot in the back there Sunday night by a white officer. Police haven't yet clarified the reason for gunfire, which a bystander videotaped and which led to fires, looting and deployment of National Guard members. 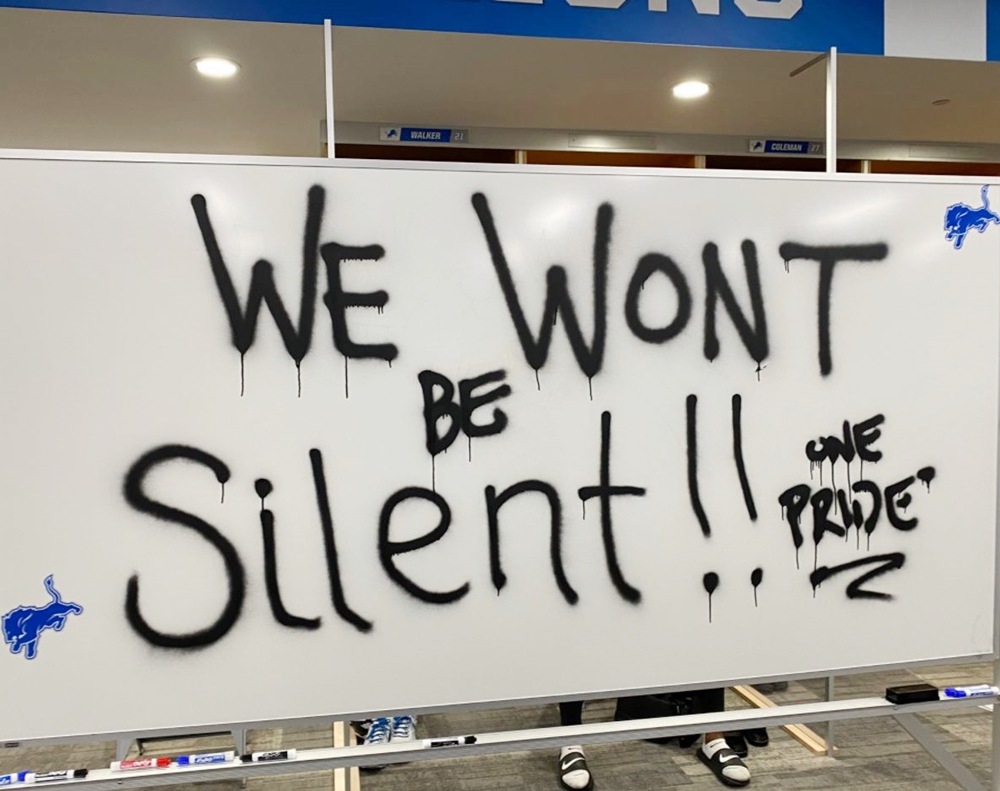 That case and others around the country are "the tipping point," Lions safety Duron Harmon told sportswriters outside the team's Allen Park facility. "Nobody can be silent no more."

He delivered impromptu remarks while standing with more than 30 teammates in hoodies, T-shirts, shorts, athletic shoes and slippers, as shown in a Fox 2 News video tweeted by Jennifer Hammond (below). Two whiteboards, typically used for play diagrams, displayed hand-drawn messages: "We Won't Be Silent!!" and "The World Can't Go On -- Stop and Listen!"

"Some people think we're just football players," Harmon said. "[In] this league, 67 percent -- two-thirds -- of the players are African American. Jacob Blake could have been anybody's bother, cousin, uncle, friend. Could have been them. And it wasn't OK."

Quarterback Matt Stafford praised coach Matt Patricia for letting them speak, Bob Wojnowski of The Detroit News tweets. He quotes Stafford's reaction to hearing teammates speak earlier about their daily concerns and why the Wisconsin shooting shakes them: "It's incredible, it's awesome. Hopefully just the beginning."

Defensive end Trey Flowers said Tuesday's action wasn't coordinated with other NFL players, according to Wojnowski, who quotes him as saying: "I want to stress, this is us unified as a team, us sticking together."

The Detroit Lions organization is going to take a stand that what happened to Jacob Blake is “Not okay.” Duron Harmon first addressing assembled media. pic.twitter.com/xOqFDFNY0V