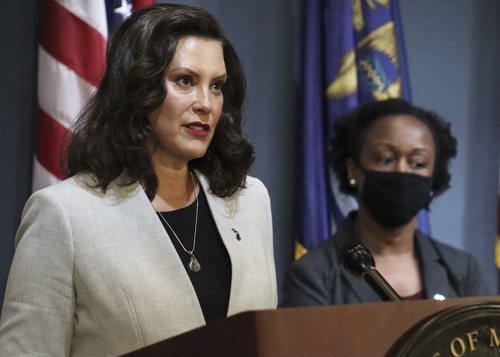 If you recently signed a petition for something you thought sounded nice — like helping Gov. Gretchen Whitmer, small business, or police and fire departments — beware: You may have supported a petition effort to curb Whitmer's powers to respond to the pandemic.

The Unlock Michigan campaign aiming to repeal a state law that empowers executives to make emergency decisions may have pulled this political bait-and-switch, the Free Press says voters have alleged. And a new investigation by the paper finds that a man leading a firm collecting signatures for the repeal has previously faced similar accusations, for allegedly once tricking Californians into registering as Republicans by telling them they were signing a petition to toughen penalties for child molesters.

Michigan has no law against such tactics.

Mark A. Jacoby of Let the Voters Decide was also arrested in 2008 for falsifying his voter registration, but pleaded guilty to a lesser charge, the Freep found.

In an interview with the paper, Unlock Michigan tried to distance itself from Jacoby:

Fred Wszolek, a spokesman for Unlock Michigan, said Thursday he has "never heard" of Let the Voters Decide ...

Jacoby said he is a subcontractor to National Petition Management, the firm Unlock Michigan hired to head up its drive to collect about 500,000 signatures. But he said he expects his company will provide nearly 60% of the signatures Unlock Michigan collects.

Wszolek disputed that. "Our army of volunteer activists will be collecting more than 60% of the signatures," he said. "Maybe he's collecting some fraction of the remaining 40%.

Unlock Michigan needs to gather roughly 340,000 valid signatures to allow the legislature to enact a veto-proof law that would strip Whitmer of her powers. As of earlier this week it said it had gathered about 200,000.