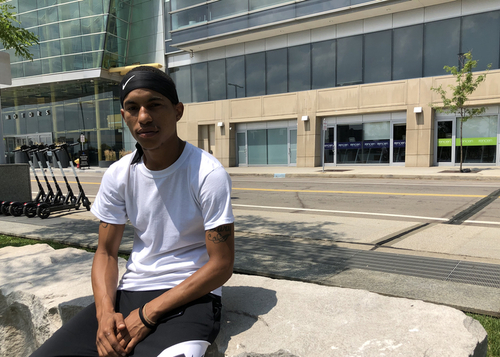 This repost from Aug. 31 is the third in a daily countdown of 10 articles from this year we’re proud to reshare. Links to the first two installments are at the end.

It’s a warm midsummer afternoon, and Deadline Detroit is waiting for Tay Crispyy to arrive. We have a meeting scheduled for noon on the riverfront, and he’s late. Then a white Challenger – the Scat Pack model with the loud pipes – rolls up, and a window tinted to near-blackness slides down. A young man with little of the hyper effect of his Instagram persona speaks from within.

Finding a parking place takes more than half an hour, and just when we’re sure Detroit’s newest and most perplexing celebrity has ghosted us, he glides up on an electric scooter – a slim, 26-year-old Black man in simple but immaculate streetwear. A very on-brand entrance.

You may never have heard of Tay Crispyy, but if you were in the media business, he might be a focus of intense interest. In a little over a year, he’s gone from a nobody to an influencer. He has, at last count, more than 88,000 followers on Instagram [Update: Over 113,000 now] (more than WXYZ and WDIV, if you're keeping score), who check his feed throughout the day to see his act, which consists mostly of Tay doing manic TV-news standups sprinkled with his catchphrases – “Are we live?” “Reporting live from Detroit’s NorthWestEast side,” “It’s unsanitary!” and a few more. It’s part Dave Chappelle, part a goof on how so-called mainstream media cover the city, and sometimes actually informative.

Sometimes these are delivered in front of news scenes – a traffic accident, an impromptu show of people doing donuts in their muscle cars – and sometimes, pitchman-style, to lure customers into a weed dispensary or some other local business.

Armed only with a phone, he has a knack for being in the right place at the right time, so much so, Tay said, that “they think I’m Batman. But I’m just in the streets.”

Eighty-eight thousand Instagram followers are ripe to be monetized, and besides the restaurant and local-business plugs, increasingly Tay posts to hawk his own merch, T-shirts and masks and headbands printed with a cartoon Tay and/or one of his catchphrases. He’s set up a website for online sales. It’s all selling well, he said and not for peanuts; he charges $25 for a mask, and gets it.

In other words, he has a loyal audience who love his act. They reward him with their own tagged video shoutouts on Instagram as they pass accidents or other lights-and-sirens incidents, which he then adds to his Instagram stories. This creates the digital atmosphere of a news organization, if you define “news” as something people are willing to pay attention to. In a world where people scroll social media all day, the thirst for new content is basically unquenchable.

(If digital culture still perplexes you, you might want to dip out now. It’s only going to get more puzzling from here.)

Everybody loves a fender-bender

So how did this all start? With a wreck on the freeway, about a year ago.

As he tells the story, Tay was in the vicinity of Mack and I-75 when he saw the accident. He got out of his car and shot iPhone video of it, narrating it in the hyper-fast style that’s become his trademark, his impression of a TV reporter doing a live standup. He posted it with a few hashtags, and “it got a good response.”

It was a simple lesson: People love accidents. Which is nothing new (it’s said to be the genesis of demolition derby, too), but there are so many to gawk at these days, thanks to cell-phone video. Soon, Tay was doing more of them, this time with himself in the foreground, two fingers to an imaginary earpiece, rat-a-tat-tatting from “Detroit’s NorthWestEastSide,” always.

(So who’s the camera operator, you might be wondering. Who’s the other member of the team? He doesn’t have one. Nor does he have a selfie stick. He just hails anyone standing nearby and hands them his iPhone. Tay Crispyy is a one-man band.)

Sometimes he brushes up against real reporters. Sometimes they message him after he’s posted something, asking to use his video.

When he turned up in a mainstream news story, as he did this spring in a finger-wagging Local 4 report on teens fighting in the street in the midst of the pandemic stay-at-home order, he was called a “comedic reporter,” but maybe the comedy shoe was on the other foot. A Local 4 reporter interviewed him about his video of the brawling. Tay said, “It was very unsanitary over there,” though perhaps the reporter didn't know he says that about pretty much everything.

So even though he’s funny and he knows that’s why people follow him, he also wants a little respect, too. And he has a point.

If this had been a normal summer, mid-August would bring around the Woodward Dream Cruise, an event blanketed with mainstream media coverage, when nothing about it really changes year after year. It is an event that is overwhelmingly older and white and a feel-good tribute to Detroit’s Motor City glory days.

Meanwhile, there are at least two other internal combustion-related cultural scenes going on in Detroit, and not just in August. Those are, first, the street racing, donut-spinning (mostly) Dodge-driving hellions who briefly shut down two freeways last year. And there are the dirt-bike and ATV riders who prowl Detroit doing amazing wheelies and other stunts. Hundreds took to the streets one weekend in early August.

And yet, if you want to know what’s happening with those automotive subcultures, which are overwhelmingly young and Black, you have to be on Instagram, following the accounts who follow them, including Tay’s. Mainstream media only notices when the police get involved – as during the “we on the Lodge wit’ it” incident last summer.

But aren’t hundreds of dirt bikers doing near-vertical wheelies news, too? Many of the graying, balding boomers in the Dream Cruise were once illegal street racers themselves, after all.

Tay Crispyy’s phone rarely shuts up. All day every day, someone is tweeting or DMing him with a tip, a WYA or a request for a personal appearance or other signal boost. He now has a rate card. You want a 24-hour spot in his Instagram stories? A thousand bucks, please. A 15-second reporting-live video with story posts? Two thousand. And so on. He said people pay, and showed off a local business’ transaction to his CashApp ID, although this was before his rates jumped, and the guy only paid $100, but still: It was seconds of work, a couple taps on a screen, and ca-ching.

“I’m supporting myself,” Tay says flatly. He’s his own boss. He goes where he wants, says what he wants.

But it all depends on getting yourself out there. On building your brand. And so, on one sultry day in August, when he came across a street scene that was either head-turning or just another day in Detroit, depending on your level of jadedness, he jumped into action.

A man was walking down Livernois leading a woman on a leash. She’s attractive, in a strapless dress, platinum-blonde wig, abundant nails and eyelashes and a collar with SLUT in gold letters on the side.

“Yes I’m reporting live from Detroit’s NorthWestEast side,” Tay reports in his signature patter. “I’m here with two unsanitary fuckin’ cats and dogs. ... Show me how you snatch her up,” he instructs the man, who demonstrates, leading her back and forth a couple of times. She’s laughing. He says it’s to “keep her in check.”

As this is unfolding, Tay implores the others watching to “tag @worldstar.” For those unfamiliar with that reference, it’s World Star Hip Hop, a monster website and associated social media streams that attract hundreds of thousands of visits a day with a combination of music videos and aggregated found material. A woman on a leash on a public street in broad daylight is right up its alley, and a link from World Star is like getting retweeted by the president; it brings thousands of new eyeballs and potentially, new followers.

The last time Tay was picked up by World Star was when he found and reposted video of a woman in Harrison Township setting her boyfriend’s car on fire and getting knocked on her butt when the gas she’s using ignites explosively. He called it “movie-ass shit.”

The definition of karma8:39pm #detroit @worldstar

Deadline and other outlets ran that story, too; good video is good video. But The Detroit News treated it as a news story, and ran down the woman’s name and charging information. That detail was absent from Tay’s post, which he captioned, simply, “the definition of karma.”

If that doesn’t seem like journalism to you, you don’t understand how the scrolling economy works. The idea is simply to get eyeballs, and then get more eyeballs, and a piece of the action at a time when people jump on their phones at stoplights and in fast-food queues.

And that, ultimately, is what Tay wants, a young man who supports himself by talking fast and getting people to listen: His own channel, his own Detroit-focused version of World Star. It’s news for a new age, he said.

“Everybody is on their phones all the time,” he said. “That’s what changed the game, right there.”

A final note: There may be some inaccuracies in this story, despite careful reporting. As often happens, we contacted Tay after our initial interview for minor fact-checks and follow-ups. He said he was no longer giving interviews free of charge, and referred us to his rate card. We declined.