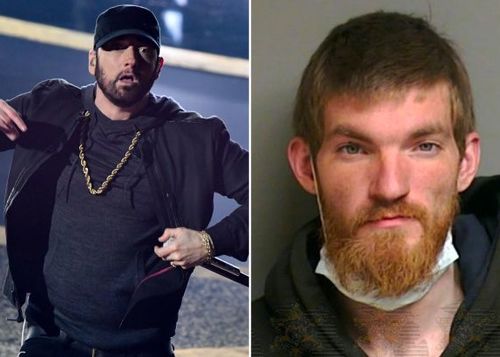 Eminem's real-life Stan expressed a desire to kill him during an April 5 home invasion, police testified Wednesday in a case filed against the alleged stalker.

The accounts provided new details of the confrontation, and how the rapper managed to fend off an attack by 27-year-old Matthew David Hughes. Eminem woke up to Hughes in the living room of his home after he slipped past security, the Free Press reported.

[Officer Adam] Hackstock testified he arrived that night at Eminem’s house in a gated Clinton Township community to find a security guard wrestling with Hughes on the ground. Hughes muttered “friend,” and said he lived in the area, Hackstock said.

The officer said he spoke with the rapper for more than an hour after Hughes was detained.

Eminem said he escorted the home invader through a TV area, game room and basketball court to an exit out of the house, Hackstock testified. Hughes did not have a weapon, he said.

A reddish colored brick was found inside a busted window on the home’s west side, he said. Clinton Township Det. Dan Quinn testified that multiple angles of security footage showed Hughes on the premises for “quite some time” before he climbed through the busted window.

Hughes is charged with first-degree home invasion and malicious destruction of property. He's been in jail since the sping incident on a $50,000 cash bond.

TMZ has reported that Hughes previously tried to track down Eminem last summer, at two other metro Detroit homes.