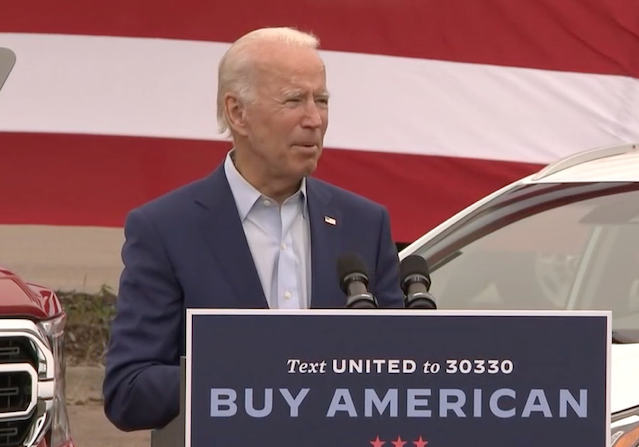 A spirited Joe Biden came to the must-win state of Michigan on Wednesday, applauding Gov. Gretchen Whitmer for her handling of Covid, and trashing President Donald Trump for failures he calls "beyond despicable."

"Governor, you've done an incredible job steering the people of Michigan through a turbulent time, much of it brought on by Donald Trump's lack of leadership," the Democratic presidential candidtate said in a speech to United Auto Workers in Warren. "You've been rock-solid governor, you've listened to the experts and led with science."

Biden then segued into "Rage," Bob Woodward's new book, which reports that in February Trump knew the coronavirus was far more dangerous than he let on publicly.

"He knowlingly and willingly lied about the threat it posed to the country," Biden said, adding that the president's failure to lead during this crisis illustrates his lack of fitness for office.

"Because of his failures, it's beyond despicable," he said. "Its a dereliction of duty."

Biden went on to say that Trump has failed to deliver on promises to Michigan, saying it would not lose any manufacturing plants, even though it did.

Biden also talked about his plan to hike penalties on companies that move jobs out of the country while providing tax breaks for those that reopen closed plants in the U.S.

"I don't buy for one second (that) the vitality of American manufacturing is a thing of the past," he said. "We have the most qualified workers in the world."

Then he had a message to the union audience:

"You're gonna have the best, most friendly union president in the history of the United States of America when I'm in the White House."

Biden is ahead in most Michigan polls. But pundits still predict it will be a close race. Trump won Michigan in 2016 by 10,704 votes.

Macomb County is considered one of key voting blocks in Michigan, along with Detroit and Kent County in the western part of the state.