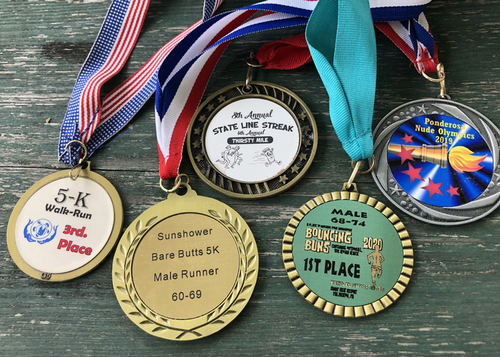 A few days ago, Jen Miller, who covers running for The New York Times, published a funny column about how she broke out of her pandemic gloom by entering the Bouncing Buns Clothing Optional 5K, a race run at a nudist resort in Pennsylvania. And that’s where Deadline Detroit learned of Bruce Freeburger, 69, who drove from Detroit to run in the same race and was quoted in her story.
We knew we had to find this guy and get to the bottom of this crazy idea of nude running. Freeburger, who lives in Roseville, arrived at our outdoor meeting fully clothed; he respects the expectations of society, and besides, it was chilly that day.

So how long have you been a nudist? Or do you prefer naturist?

There's actually two types. One would be recreational nudists, and then the other would be a social naturist. Some people (practice nudism) for fun and thrills. But a social naturist is really a philosophy, you know, You actually have ethics and stuff like that. 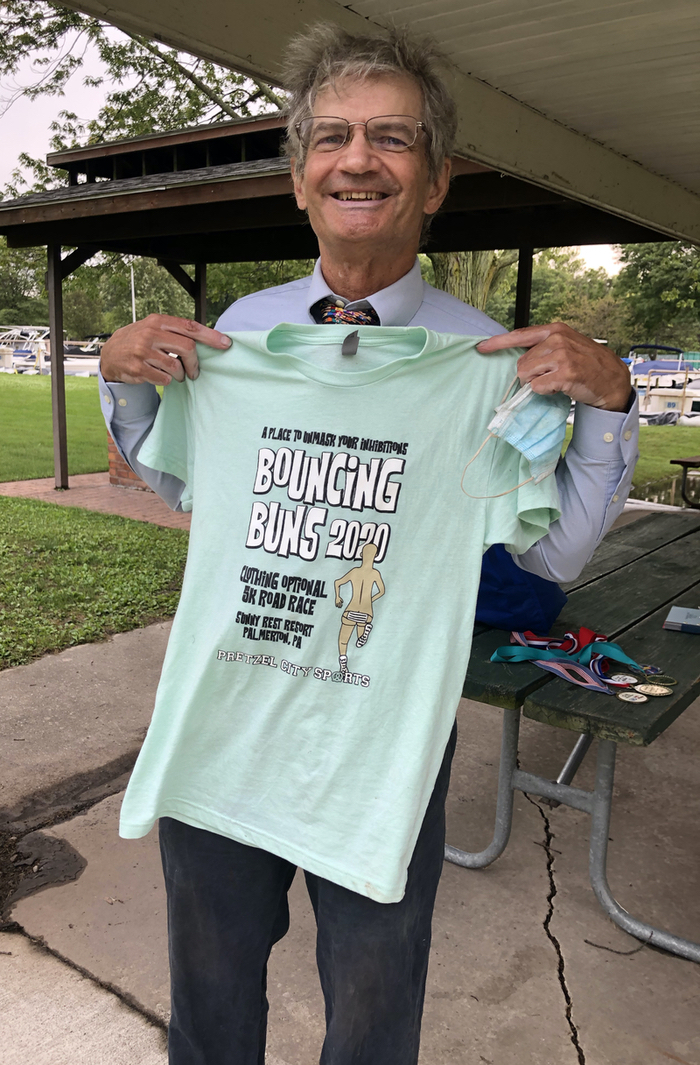 Nude races have commemorative shirts, but wearing them is optional. Bruce Freeburger shows his from the Bouncing Buns 5K in Pennsylvania. (Photo: Nancy Derringer)

I'm going to assume that you consider yourself a social naturist, then. What is the philosophy, briefly?

Well, one thing is that it's non-sexual. And it's so much of an equalizer. Forest Hills Club (in Saranac) says on their webpage: What car you drive? Where your kids go to school? What stores you bought your clothes at? It doesn't make a difference.

OK. So how long have you been a social naturist?

I would really describe myself as a runner rather than that.

You like to run and you enjoy running nude. You don't hang out at nudist camps or naturist camps when you're not planning a run?

Yeah, it's the competition. The fact that the runners themselves are (competitive), yeah. It's a fun event, and the only time I really run naked is in competition.

When did you do your first nude race?

I think it was 2016, at Turtle Lake Resort near Coldwater.

I’m not sure. For a man, Masters men over 40? It's very competitive. Women, you could walk up and be third place in your age group.

So have you done them every year since that?

Yeah. I started looking around. Are there any more of these? And that's when I found that naked5k.com was available [a website he runs, where he tracks and publicizes nude races].

Are there any longer than 5k?

Not really. A slightly longer one was at Sunny Rest (in Pennsylvania). There was like a 7K. In Finland there's a 10K, and I think at Burning Man, they have a clothing-optional half marathon.

Every picture I've seen was, you know, it's in the desert, under that sun.

So here’s my big question: I have breasts, presumably you have all the equipment that men have. Isn't it painful to run naked?

No. Jen Miller asked me that. I saw she wore a bra. She said she tried on a treadmill but it didn’t work for her without one. One woman, she and her husband do races together. And she definitely goes full frontal. And in fact she ran alongside me at Sunny Rest like that.

So do you wear anything other than shoes?

I have ankle sleeves, which prevent shin splints.

But nothing, no kind of supporter or anything like that?

Okay. All right. So what does it feel like to run naked? 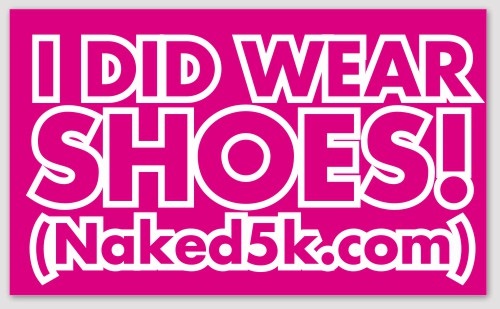 Really, I don't notice it that much. The big thing is just, it's the crowd being around the race. It's the fact that there's no fear. The women in particular say it's about body confidence. That was just huge. Because every single part of your body as a woman, you know, it's either too much or too little. And here's something where none of that matters.

You call clothed competitions “textile races.” What does the textile running community think of this?

So what do you want the world to know about nude running?

Oh gosh. The sportsmanship, it's amazing. There’s a race near Richmond, Ind. The guy who was [the official] timer, his name was Gary Butts with two T's.

But he has said for 20 years that he’s been a professional timer, he does 150 events a year. Okay. And this [nude race] is by far, the most unselfish, sportsmanlike people that he's ever worked with, both the organizers and the runners themselves. It's like, they're, they're the best runners he's ever dealt with.