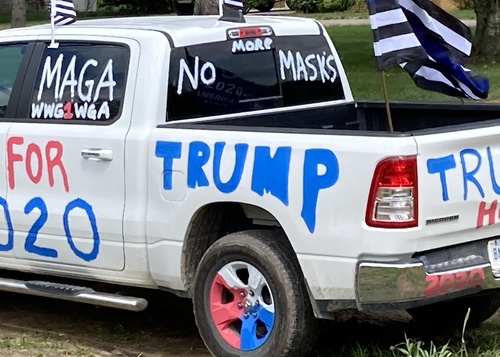 “I’m not afraid,” said a man with a red “Make America Great Again” cap. “The good Lord takes care of me. If I die, I die! We gotta get this country moving. What are you gonna do, wear a mask and stay inside for another year? Huh? Where’ll that get us?”

So why not wear it, Acosta asked.

“I have a hard time understanding people when they talk.”

“But you can hear me right now?” the masked Acosta asked.

“I can hear you,” the man replied.

A third man at the aircraft hangar rally – bald, with a trim, white beard – was most emphatic.

“Because there’s no Covid,” he said. “It’s a fake pandemic created to destroy the United States of America.”

When Acosta countered that even Trump had called the virus “deadly,” the man replied: “That’s his opinion,” as if proven facts are merely a matter of opinion, even when it comes to Trump.

The man added that true statistics show only a tiny minority of the nearly 200,000 American pandemic deaths have been caused by Covid-19 alone and that the vast majority have complicating factors.

As was the case when menacing science-deniers carried guns into the state legislature last spring, this was one of those glimpses of Michigan before a national audience that makes the Great Lakes State look like a backward place full of belligerent, selfish, obtuse people.

You’ll find them all over the state, too, as Trump campaigns for reelection Nov. 3 against Democrat Joe Biden. In Ray Township in northern Macomb County, a big, front lawn of a house on a recent, sunny day featured a full display of Trump hats, shirts and signs for sale. 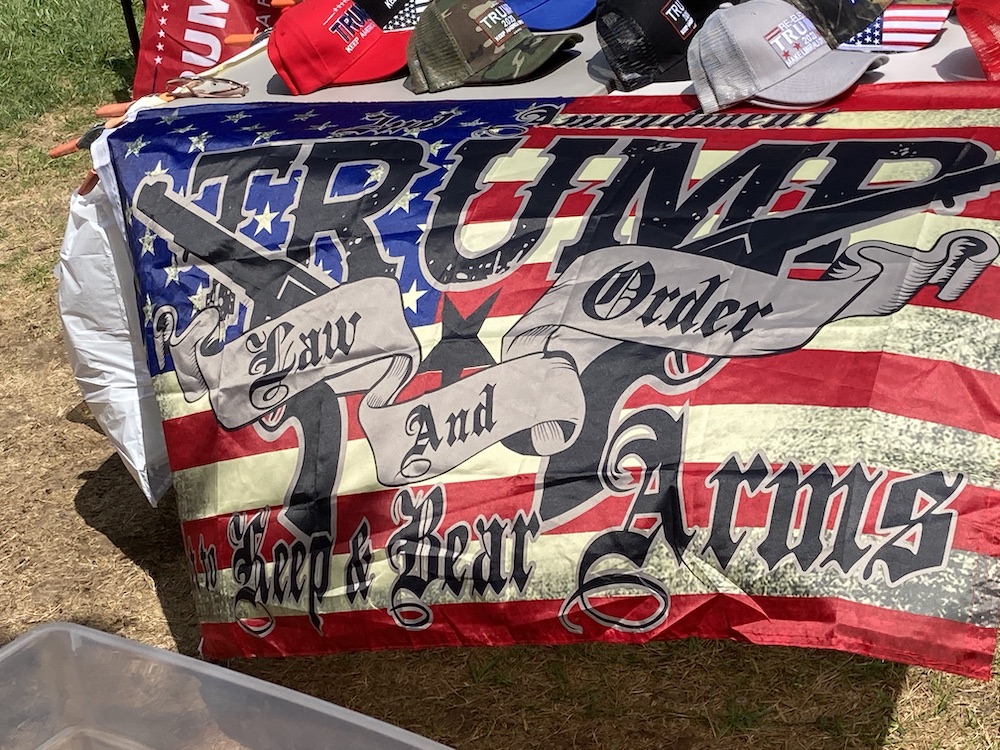 A Trump supporter in Macomb County

A big banner (right) showed two guns crossed over an American flag. Among smaller signs nearby for lawn display was: “Trump 2020. No More Bullshit.”

But the biggest item in the yard was a white Ram pickup decked with a star-spangled banner. All over it were hand-lettered slogans. One said “No More Masks” in white on the back window.

At the cashier’s table full of Trump hats and shirts outside the Ray Township home, a woman wearing no mask spoke to a woman with no mask who had three unmasked children with her. The customer put her purchases on the table and told the cashier: “It’s so nice to see someone without a mask.”

Indeed, said the woman at the till. She hates it when she’s done working and has to go grocery shopping and wear a required mask.

As they spoke, drivers whizzing by on Romeo Plank Road beeped because one painted orders on the pickup truck was: “Honk 4 Trump.” 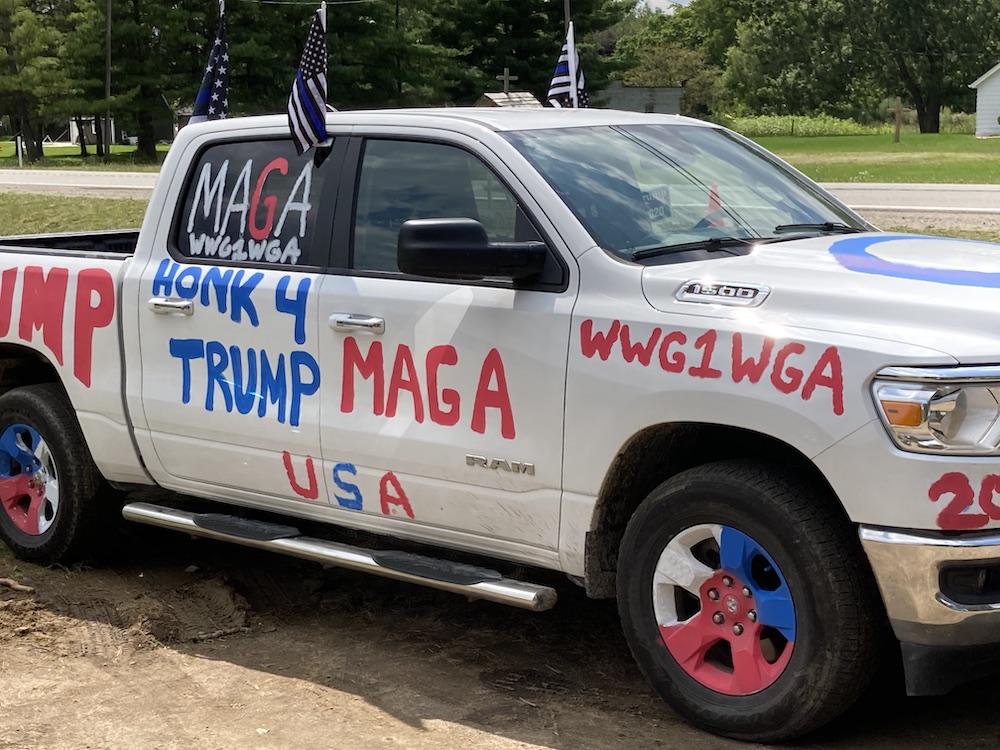 Another message painted on the truck was “wwg1wga.” On the internet, that destination leads you to into a QAnon wonderland of conspiracy theories about the deep state and warnings of “The Storm” that is to come.

At Trump’s rally in mid-Michigan Thursday, he rambled for more than one hour with his usual insults, lies, obfuscations, braggadocio, sucker-punches and smears. He compared himself to Winston Churchill and Franklin D. Roosevelt.

As the late-summer sun set and the lights got bright, he told an aide to turn up the speaker volume and he strutted about the stage in his usual uniform of red tie, white shirt and blue suit, mugging and gesturing to the howling crowd, jammed together, most without masks.

In many ways, it was a typical Trump rally. But something came about midway that was way out there, even by Trump standards. 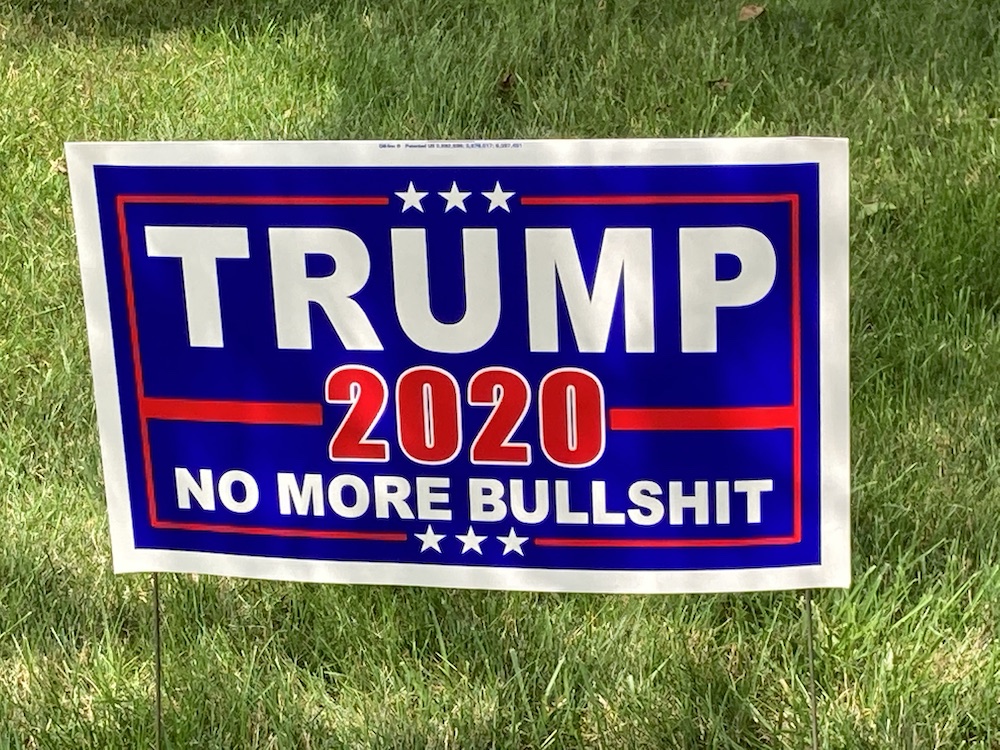 The message is clear

Even Trump seemed taken aback, in a pleasant way, and he wallowed in the sound. He pretended to wipe tears from his eyes.

“Don’t say that,” he told his chanting cult. “I will start to cry. That wouldn’t be good for my image.”

Even those who despise Trump must acknowledge an unpleasant truth: He is a powerful demagogue who has built an unbreakable alliance with a lot of angry, mule-headed, weaponized partisans. His henchmen are taking on a nasty edge.

During the speech, campaign aides ejected New York Times reporter Kathleen Gray for posting on Twitter about the lack of masks. "That's a first for me," she said in a now-deleted tweet.

Should Trump lose to Biden this autumn, how will Trump’s troops react? And what will Trump tell them to do? There is more than a whiff of Nuremberg propaganda rallies in the air. This is not a normal election year. He is not a normal President. These are not normal supporters. Things could get much worse.