LeDuff: A Detroit Neo-Nazi Nicknamed 'Crazy' and His Grisly Confession to a Comedian 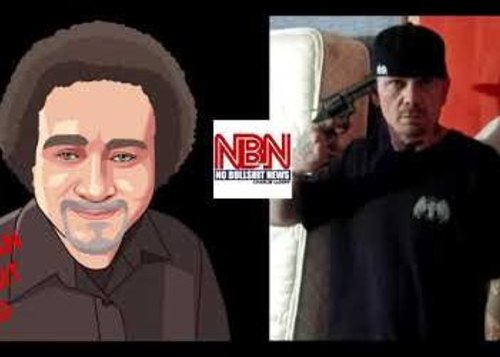 A bizarre scene unfolded within a bizarre scene in Detroit Tuesday night. A barricaded gunman holed up with his couch-surfing friend, whom police believed to be the gunman's hostage for the evening.

Outside, another friend of the gunman was trying to shop phone interviews to the media because the gunman, Thomas Curry, 38, aka Michael Heiliger, wished to make a statement.

Oddly, the media did not jump. They believed the rumor that the chief of police was going to let the gunman hold some sort of press conference if he released the “hostage” and came out peacefully.

It is hard to believe that the police would condone a dope-addled, sleep-deprived, neo-Nazi with the nickname “Crazy” conducting a front-lawn press conference to spew conspiracy theories and self-incriminating statements without being read his Miranda rights.

But believe it the local media did.

Detroit Red, a correspondent for my "No BS Newshour" podcast, was berated as an unethical reporter because he accepted the invitation to speak to the gunman by phone.

Funny how a middle-aged comedian who drives for Uber has more moxie and understanding of what the public wants to know than the college-trained mannequins.

And the media never got its press conference. Because when Heiliger finally emerged Wednesday morning from his west-side house after a 30-hour standoff, it was in a body bag. He'd put a bullet in his head.

So what did Detroit Red supply the public that the rest of the press did not?

Crazy's crazy ramblings and raving, most certainly – the stuff about cigarettes and potato chip dip and city hall conspiracies.

But there was real news. Crazy – in his own voice – confessed to a grisly triple murder back in June, where he assassinated a fellow member of the Highwaymen Motorcycle Club and two associates, severed someone's testicles, shoved them in his mouth and then burned the house to the ground.

Heileger was arrested and then released while investigators gathered more information. Prosecutors were close to filing his warrant for a triple homicide and Heileger must have known that, thus explaining why he shot at cops after running a red light and barricading himself in the Brightmoor house in Northwest Detroit.

That is certainly newsworthy stuff, coming raw and pure and without the filter of the authorities. It's what the public desires and why the press shows up in the first place. So when a middle-aged comedian shows more moxie than the mainstream media, that's got to tell you something.

► Other "No BS Newshour" episodes