The victim and perpetrator were both honor students. But one died, so the other one will go to prison for at least 27 years. 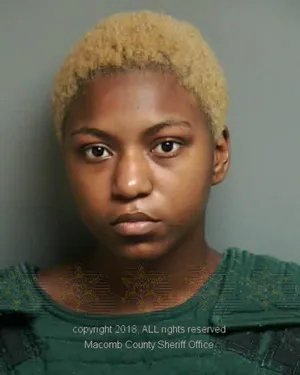 Tanaya Lewis, 19, was sentenced Wednesday in the 2018 fatal stabbing of her classmate, Danyna Gibson, in a classroom at Fitzgerald High School in Warren, which they attended. The dispute was said to be over a boy.

"If I could take it back, I would," (Lewis) said in emotional remarks before she was sentenced Wednesday. "I accept the punishment ... and I know no amount of apologies will take it back.  ... And I'm so, so sorry. I just hope one day, you'll be (able to) forgive me."

Lewis pleaded no contest to first-degree premeditated murder; the weapon was a steak knife that she had brought from home. She was sentence to 27 to 60 years in prison for the crime committed when she was 17.

District court testimony indicated Lewis chased Gibson in the classroom, stabbing her numerous times, in the presence of other students and a teacher.

Danyna's father, Preston Gibson, told the court Wednesday that his daughter's death "has changed the world." He said Danyna told him she wanted to go to school for computer engineering and was learning how to build robots.