Mail delivery slowed significantly in the Detroit area this summer following a series of changes by the U.S. Postal Service as part of what some saw as a Trump administration effort to undermine mail-in voting ahead of the election.

The region was among the hardest hit by changes imposed by Postmaster Louis DeJoy, data collected as part of a federal lawsuit against the agency and published by The Guardian shows.

The rate of on-time first-class deliveries dropped from 86 percent when DeJoy was appointed in mid-June to 61 percent Aug. 1. The rate has begun to improve since the Trump administration backed off the changes, but still isn't at previous levels. On-time delivery was at 81 percent as of late August.

Below is a graphic published by the Guardian showing the effect of the changes locally. The previous slump was the result of the coronavirus pandemic. 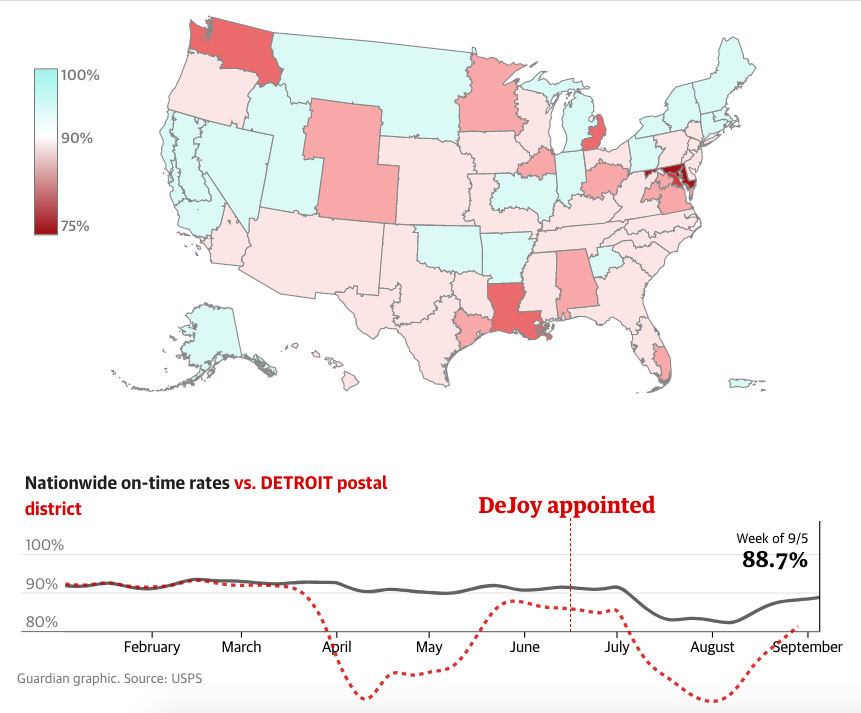 Shortly after his installation, DeJoy instituted a number of changes he claimed would make service more efficient, but succeeded only in slowing things down as union officials say staff were forced to cut corners to meet quotas.

Roscoe Woods, president of the 480-481 Local American Postal Workers Union in Michigan, says he was "shocked by how fast" Trump managed to "politicize" the agency, but that the issues have since been resolved. He's says he's so confident in USPS' ability to handle an expected influx of absentee ballots that he plans to vote by mail himself.