Detroit's Board of Police Commissioners will develop guidelines about what surplus military gear the city can add to its police force. 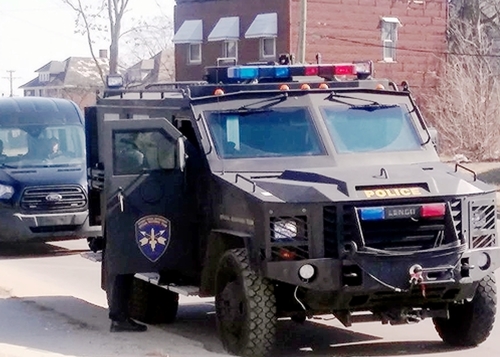 "This includes weapons, vehicles, robots and other tactical equipment," says the Free Press, reporting on a 5-4 vote to draft a policy.

"This is the type of equipment used during wartime," District 5 Commissioner Willie Burton, who proposed the motion, said. "We must set boundaries. Residents' lives are at stake." ...

He'd like for the policy to define what DPD can and cannot obtain ... and for the policy to obligate DPD to gain the board's permission prior to making acquisitions through the [Pentagon] program. ... "I'm shocked we've gone so long without a local policy," Burton said. "We have to bring residents' voices into the conversation, while also working with the mayor and police chief."

The Detroit Board of Police Commissioners is DPD’s civilian oversight body.

The Freep quotes Commissioner Daryl Brown, a member of the oversight panel, as saying DPD shouldn't be able to get machine guns and grenade launchers from the federal government without going through the board. President Donald Trump reauthorized local departments to obtain grenade launchers through the federal program in 2017, reversing Barack Obama’s prohibition in 2015.