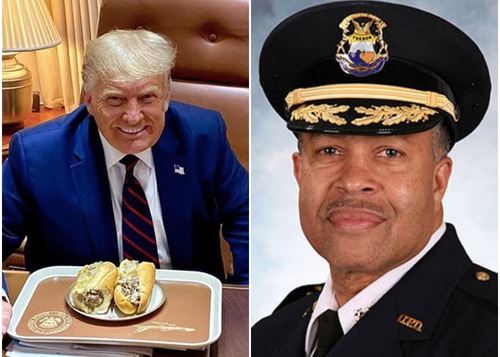 A Fox News fan heaps praise on a regular.

Fox 2 got an "exclusive" interview with President Donald Trump in which its Roop Raj offered limited pushback on falsehoods including Trump's claim that he shut down the country in response to Covid-19. Little else of note was said, but Trump for the first time shares thoughts on Detroit Police Chief James Craig, who he's apparently seen during his many appearances on Fox News.

With just 42 days until Election Day, President Donald Trump is sitting down with FOX 2 for an exclusive interview to discuss COVID-19, his confidence in the election process, and the Supreme Court vacancy.https://t.co/gCa77pBkgD https://t.co/uLAmubjaGb

"You have a great police chief. I watch him, I really like him a lot,” Trump said. “I think he’s terrific. I think he’s just an incredible representative too. He speaks so well about a very important subject, which is crime and the rioting and all the things you see in certain cities."

Craig's department has been accused by critics and in a federal lawsuit of unjustifiably brutalizing Black Lives Matter demonstrators on several occasions this summer, though some have applauded its response.