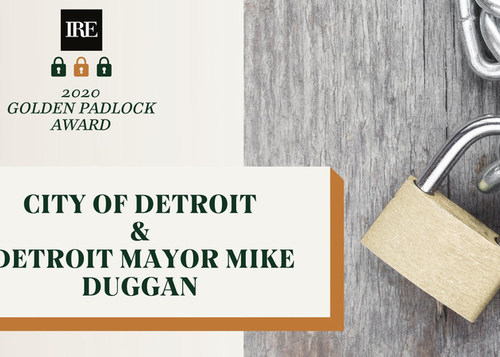 Investigative Reporters & Editors Inc., a nonprofit dedicated to improving investigative journalism in the U.S., made its Golden Padlock Award this year to ... drumroll ... the city of Detroit and Mayor Mike Duggan.

The award was announced Wednesday as part of the IRE's annual conference, held virtually this year.

The Golden Padlock, "which recognizes the most secretive U.S. agency or individual," was bestowed upon Duggan and the city for for "its handling of a Detroit Free Press public information request and for ordering the destruction of internal documents."

In a press release, IRE explains:

Initially, city officials claimed key records the newspaper sought were lost in a corrupted file. When the Free Press demanded the files be recovered, the documents ultimately showed Duggan had ordered city officials to fundraise for a nonprofit run by a woman he was observed meeting with after hours at a suburban home.

A subsequent Free Press records request triggered a $222,000 fee estimate from the city, sparking a Free Press lawsuit, which remains before the courts.

No one from the city has yet stepped forward to make an acceptance speech.

The competition was stiff, too: “Unfortunately, it seems more and more agencies compete for this award each year through their growing efforts to suppress information,” IRE Executive Director Doug Haddix said.