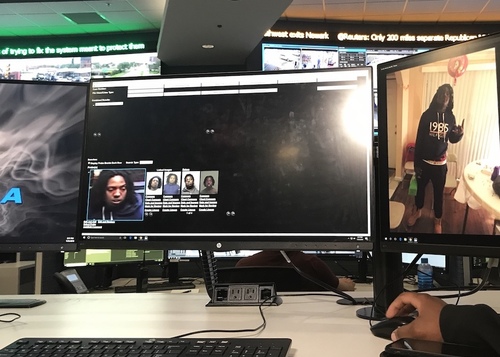 A suspect arrested with help from Detroit's facial recognition system. (By Violet Ikonomova)

Detroit City Council has voted to approve a contract supporting the city's controversial facial recognition software, which has led to the wrongful arrests of at least two Black men.

The 6-3 vote in favor of a two-year contract with South Carolina-based DataWorks Plus came after about 30 people spoke against facial recognition at a public hearing and a caravan of vehicles protested in front of Councilmember Andre Spivey's house Tuesday morning.

Critics pointed to studies showing the technology disproportionately misidentifies people of color and noted that other major cities — including Boston, Portland and San Francisco — have banned its use. Detroit is the nation's Blackest and most violent-crime ridden big city.

Council President Brenda Jones and Councilmembers Raquel Castañeda-Lopez and  Mary Sheffield were the lone no votes.

Jones said it was a difficult decision, but that she had to vote with her "head" over her "heart." While her heart wanted to help victims of violent crime, she said her head told her the equipment had hurt the people it misidentified.

Lopez told police officials present at the meeting that while she wanted them to have tools to identify violent criminals, she "would not prioritize efficiency for one population that may have been the victims of crimes over the people who may be ... discriminated against by this technology."

Police officials have called facial recognition a much-needed tool — a "modern-day mug book" that helps expedite the process of identifying suspects. They say at least 56 people — some of them murder suspects — have been arrested with help from the technology since it was adopted in 2017.

While Chief James Craig has conceded that 96 percent of potential matches produced by the system are incorrect, he's said a layer of human oversight prevents false arrests. Guidelines require a technician to vet a potential match before sending it to a supervisor for approval. From there, it is forwarded to investigators as only as a lead — additional evidence is needed to make an arrest.

Previously, the guidelines were standard operating procedure; they were put into a formal policy with input from the Board of Police Commissioners last September.

The oversight was supposed to be in place in 2018 and 2019, when Robert Williams of Farmington Hills and Michael Oliver of Detroit were misidentified, but detectives failed to follow some protocols, including the requirement that the technology be used only for violent crimes.

The two-year $220,000 contract will support upgrades and maintenance of the technology and extend its license. Facial recognition was first obtained after council approved a $1 million, two-year contract with DataWorks in 2017.

Initially proposed in June, the contract extension was pulled back and held for three months as public outrcy surrounding the wrongful identification cases, which captured national headlines, died down. The American Civil Liberties Union has said Detroit is the first city in the country where the controversial technology has led to false arrests.

In the lead up to the vote, police and Duggan administration officials said the department would continue using facial recognition regardless of whether the contract extension was approved. They said the city already owns the technology and that some support responsibilities could be offloaded to its Department of Innovation and Technology (DoIT).

An ACLU attorney representing Williams warned a yes vote would expose the city "to ruinous liability, which is not a good use of taxpayer money." A suit has been filed on behalf of Oliver.