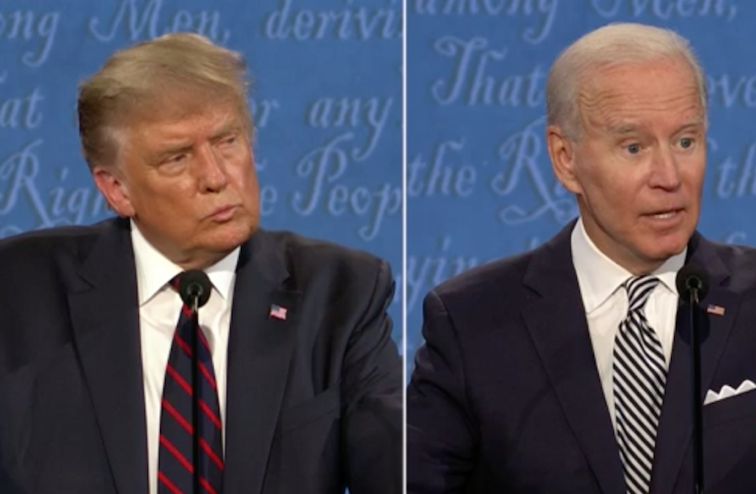 It was exhausting. Pathetic. Nauseating. And that was the good part.

Tuesday night's 90-minute debate between Donald Trump and Joe Biden was unbearable. It was imposssible to get anything from it.

The losers? Everyone. America. You. Me. And definitely Fox News moderator Chris Wallace, who acted like a substitute teacher who lost control over his seventh-graders.

Here are comments from local folks, including politicians, members of the media and pundits.

Where can I get a bumper sticker that says “Will you shut up, man?”

Desi cannot take it anymore. He wants me to change the channel and I won’t give him the remote. #Debates2020 pic.twitter.com/jdeEDu3e4Y

My choice for debate moderator pic.twitter.com/DtpHzxn5WP

Chris Wallace is a master journalist, in part, because he always has command of his interviews.

I have no idea what he's talking about.

Let’s do two more of these! Said no one ever.

When this is over, please don’t forget that the president was given an easy, wide open opportunity to denounce white supremacists and he just wouldn’t do it.

There was, for an unbearable moment, a fear that Biden would walk over and deck DJT after the despicable remarks about Biden’s son. It had to have been close.

Final thought: ‘When people show you who they are, believe them,’ Maya Angelou.

Trust me. A mom needs to moderate the next debate.#momsgetitdone #Debate2020

DO NOT FORGET: Donald Trump told us that he has already fixed health care tonight. He actually said that.

The president of the United States, after refusing to condone masks or to condemn racism, urged his supporters to commit voter intimidation.

We can waste time debating that nasty debate, but no debating this: Trump broke more rules and interrupted more, and Biden fired more pointed insults. There was one horrific moment when something was left unsaid by one candidate. If you weren’t alarmed, I don’t know what to say.

The debate turned into a shit show. But I was entertained.

Tonight's debate made it abundantly clear that President Trump doesn't share the values of Michigan's working families when it comes to protecting our health care. #Debate2020

.@JoeBiden kept his cool, spoke to the people, laid out his plans. What a contrast. @realDonaldTrump is a horrible person, in addition to being a horrible president.

For ninety minutes, @realDonaldTrump made a confident, commanding and compelling case for his re-election and took Joe Biden to task for supporting radical policies that would raise taxes, destroy jobs and make our communities less safe. (1/3)

What is @JoeBiden saying? ...@realDonaldTrump negotiated awesome trade deals like USMCA that will help MI workers in manufacturing and agriculture sectors!

I would guess that, of the millions who watched that debate, Hannity is the only one who could possibly think that court packing was the biggest news of the night. https://t.co/Y3pSkiok1w

As someone who's moderated quite a few debates, I'm sitting here trying to think of a format or approach that would bring order out of this chaos.
I got nothing.#PresidentialDebate

How are there still undecided voters? #Debate2020 pic.twitter.com/9z3B1EJy3p

Forget analyzing what was not a debate. Remember only that Donald Trump did not condemn white supremacists but told a white supremacist group to #standbackandstandby because someone needed to take care of another extremist group. It was a call to war. It was treason. #Debates2020

Joe Biden’s struggle with Latino voters is real. Tonight was no different! https://t.co/Am3qTQrkkA

This one didn’t happen!

All debates are being held in red states.

Fight for our democracy. End the reign of Trump.

Biden looks like he’s wondering he even agreed to be in the same room with this idiot.

Two final thoughts of the night. First, if you are a Democrat and weren’t already committed to doing everything possible with your money and your time over the next 5 weeks to defeat Donald Trump, you should be now. Second, no more debates. Enough of Trump’s bullshit.

The president's refusal tonight to speak out against violence is one of the lowest points in the history of the presidency. pic.twitter.com/ABQfzG1HRQ