If there's one name that's as good as a lock on a Wayne County judicial seat, it's Hathaway. 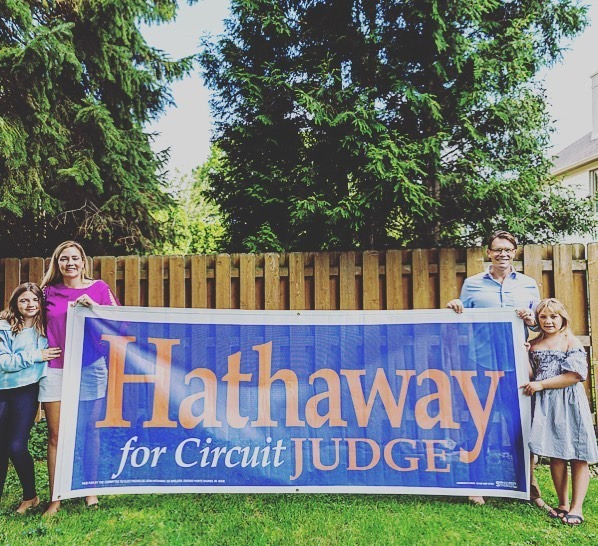 Hathaways -- at least 10 of them -- have served as Wayne Circuit judges in the last 20 years. (One, Diane Hathaway, made it all the way to the state Supreme Court before a mortgage-fraud scandal led to her downfall in 2013.) Their campaign signs, with "Hathaway" in a standard font, are almost a brand in Wayne County.

And if one is not born a Hathaway, one can always marry into the family.

M.L. Elrick has an amusing tale of how one, a lawyer who until recently was known as Nicholas Bobak, decided in his late thirties to take his wife's surname and, yes, run for Wayne Circuit Judge:

Nicholas John Hathaway, as he calls himself on his campaign website and in online campaign ads, is technically Nicholas John Bobak Hathaway. That became his legal name after he completed the process of adding the surname of his wife, Wayne County Circuit Judge Dana Hathaway, to the end of his given name on Nov. 20, 2019.

Less than a month later, on Dec. 18, 2019, he created The Committee to Elect Nicholas John Hathaway.

“I changed my name to honor my wife," he told the Free Press. "If I had a nickel for every time an attorney asked me 'Are you going to change your name and run for judge?' I wouldn’t need a job.

"This is a decision we made within the bounds of our family and our marriage.”

And that is all the comment would-be Judge Hathaway was willing to make about his midlife epiphany.

Elrick digs up a case from Bobak Hathaway's past, in which he sued that same court for racial discrimination. He was at the time employed as a referee there, a sub-judicial tier for family court cases involving juveniles. Bobak Hathaway, then just Bobak, claimed he'd not been considered for various promotions while "less-qualified African Americans" got those jobs.

The case was dismissed. The election will tell whether this strategy is more effective.