Cooler weather may be here, but restaurateurs aren't giving up on outdoor dining yet. 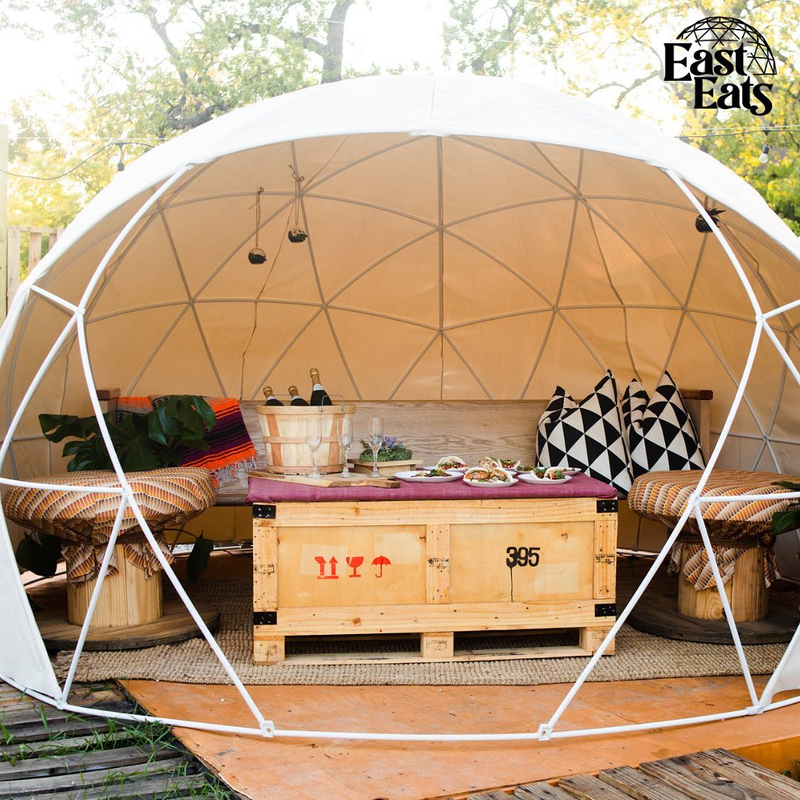 Step into the igloo. Have an Asian taco (EastEats Instagram)

A new pop-up in Jefferson Chalmers will seat diners in open-sided yurts -- or maybe igloos? -- situated on an open lot adjacent to the home of Kwaku Osei-Bonsu, the founder of Black Restaurant Week in Detroit. The soft launch is Oct. 5 and the menu is vegan-friendly (but not exclusively so), as well as taco-ish with lots of Asian influences.

Is that interesting enough for you?

Mark Kurlyandchik in the Free Press introduces us to the minds behind EastEats:

As they tell it, Osei-Bonsu and Talley went to Howard University together. So when Talley, a native New Yorker, moved to Detroit to conduct postdoctoral research, he reached out to Osei-Bonsu, who had just purchased the side lot adjacent to his house in the Jefferson-Chalmers neighborhood. Inspired by something he’d seen in New York years ago, Talley had an idea for a restaurant on the lot made up entirely of those outdoor igloos that have been popping up outside of bars and restaurants in recent years.

“I owned the land, so it was like, ‘Yeah, let’s try it here,’ ” Osei-Bonsu said. “It worked out perfectly in the sense of where Jefferson Chalmers is in terms of development. And the fact that it’s adjacent to downtown and Belle Isle and Grosse Pointe — it was perfect to put it here.”

And before you ask about the weather, be advised the domes will be only be open-sided while temperatures remain mild. During cold weather, they'll be closed and heated.

Dishes are named for well-known Detroiters. So you can get, say, a Ruth Ellis (jalapeno Asian slaw, bam bam sauce, bean sprouts, peanuts, cilantro and edamame) with pan-friend tempeh. Or an Aaliyah with shrimp. And so on.

Reservations and more info can be found on the EastEats Facebook page.