These Detroiters are politically disengaged. Will they turn out for Biden?

In Detroit’s 48205 zip code, in a neighborhood residents say has no name, political disillusionment runs deep. There are more abandoned houses than yard signs on Strasburg Street north of East 7 Mile, and median household income in the area, where 92 percent of residents are Black, is about $36,000 — about half that of the metro region. 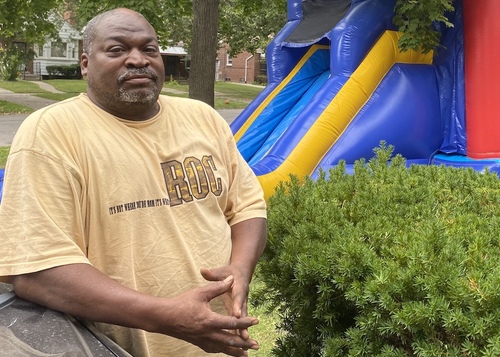 “It’s just not gonna make one bit of difference who is or who isn’t the president,” says Freddie Butler. (Photo: Violet Ikonomova)

Just 59 people voted at the local precinct in the last presidential election, putting it among 3 percent of Detroit precincts that saw less than triple-digit turnout.

On a recent Sunday, as he kept a watchful eye on a handful of grandkids climbing in and around a moon bounce and inflatable slide, Freddie Butler shared a sentiment we’d hear repeated throughout the day in districts like his.

“It’s just not gonna make one bit of difference who is or who isn’t the president,” said the 57-year-old self-employed plumber. “As far as it’ll reach down to me? We haven’t gotten much of anything from any president at this level in life, being the people that we are.”

Though he’s a reliable Democratic Party voter and says he’ll begrudgingly cast a ballot for Joe Biden Nov. 3, Butler’s comments underscore a worrisome trend as the party seeks to recoup losses suffered by Hillary Clinton in Black urban centers in the upper Midwest. In Detroit districts where people are less likely to vote, there’s limited enthusiasm for Biden, raising questions about whether he can gather enough votes in the Democratic stronghold to help flip the state.

A decline in Black turnout in cities like Detroit, Cleveland, and Milwaukee cost Clinton dearly in 2016, contributing to losses in critical states like Michigan, where she fell by just 10,704 votes. That loss could have easily been averted with greater turnout in Detroit, where 41,625 fewer ballots were cast than in the election prior, when Barack Obama galvanized infrequent voters and turnout reached 51 percent.

Though Democrats have placed renewed emphasis on turning out Black Detroiters to avoid the same mistake, less effort is being made to reach the politically disengaged, specifically, as such outreach can be costly and time-consuming. But there are more than 200,000 eligible Detroit voters who have not cast ballots in each of the past several presidential elections, and experts say these so-called low-propensity voters can prove crucial for Democrats in swing states with tight margins.

"The real swing voter is the person who swings between voting and non-voting,” says Branden Snyder, executive director of Detroit Action and the former head of Clinton’s youth campaign in Michigan. "By and large, Black folks are voting ... Democrat. It's just (a matter of) engaging them about what they want."

Ninety-five percent of Detroit voters went for Clinton in 2016.

A dozen Black residents we spoke to in low-turnout precincts divided about evenly into three camps: Disillusioned residents who’ve never voted or vote infrequently and do not plan to this fall, frequent but disillusioned voters who plan to go for Biden out of a sense of obligation; and frequent voters who support Biden but are primarily enthusiastic about removing Trump.

Snyder says his organization, which is targeting 163,000 infrequent and never-before voters of color, is seeing a similar trend, but notes there's a small segment of the population excited to vote Biden because he was Obama's vice president.

Down the street from Butler, in a brick bungalow flanked by abandoned houses with overgrown bushes, Leonard Jackson, a stocky 39-year-old, expressed similar disillusionment.

Jackson hasn’t voted since graduating from high school and doesn’t plan to this election. He’s leery of politics, saying it always comes “with a hidden catch.”

“When you start really paying attention — you pick a candidate, you follow them — you start hearing all the bad stuff and it’s like you didn’t dig deep enough,” he said. “Everybody’s gonna promise a lot of things, but when they promise one thing, they gotta give up another thing.”

If Jackson were to vote, he says he isn’t sure who he’d choose. When asked his thoughts on Biden, he brings up the 1994 crime bill authored by the then-senator, which critics say contributed to mass incarceration. Five of Jackson’s family members have been incarcerated. Though he knows Biden has apologized for his hard line on crime, he says, “you can’t forget that.”

Meanwhile, he supports Trump’s position on illegal immigration, because he believes undocumented workers could threaten his job as a landscaper by undercutting his prices. He also doesn’t fault Trump for his handling of the pandemic, saying that while he could have done better, no one could have been fully prepared. Mostly, however, he says he likes that Trump is a businessman who “makes decisions on bringing in more revenue.”

Butler said he also feels indifferent about the two options, but votes Democrat because, “We just try to go with whatever they tell us is best.”

Like the overwhelming majority of voters we spoke to, his top concerns are neighborhood conditions and the economy. He referred to the nearby stretch of East 7 Mile — once full of bustling shops — as a “ghost town” of “blight.”

He didn’t believe Biden would help the situation, just as he says he saw no tangible improvements during Obama’s presidency. That administration did free up $265 million for home demolitions in the city, but funds were withheld from his neighborhood because it was in fact too abandoned; blight remediation was deemed a poor investment because there weren’t enough people to reap the benefits. It’s a catch-22 that’s left people in the city’s worst-off neighborhoods with the impression they’ve been forgotten.

In Butler’s mind, politicians don’t run for president to help people like him. But his beliefs about Biden are more sinister. Why, he asks, would someone with apparently diminished mental faculties and unclear policy goals run at all?

“Biden is running for himself,” he says, answering his own question.

Allan Whiteside, 51, who we found soaking up the fading sun with two cousins in the Northwest-Goldberg neighborhood, on the west side, says his vote for Biden is a choice between the lesser of two evils.

“But there’s really no candidate that’s (ever) really strong,” he said. “They come out with good ideas, but once they get in there, it’s like everyone just falls into the status quo.

“But I understand it because I don’t think one person can change the system. It is what it is at this point, it’s not going to change, but I still go and do my part.” 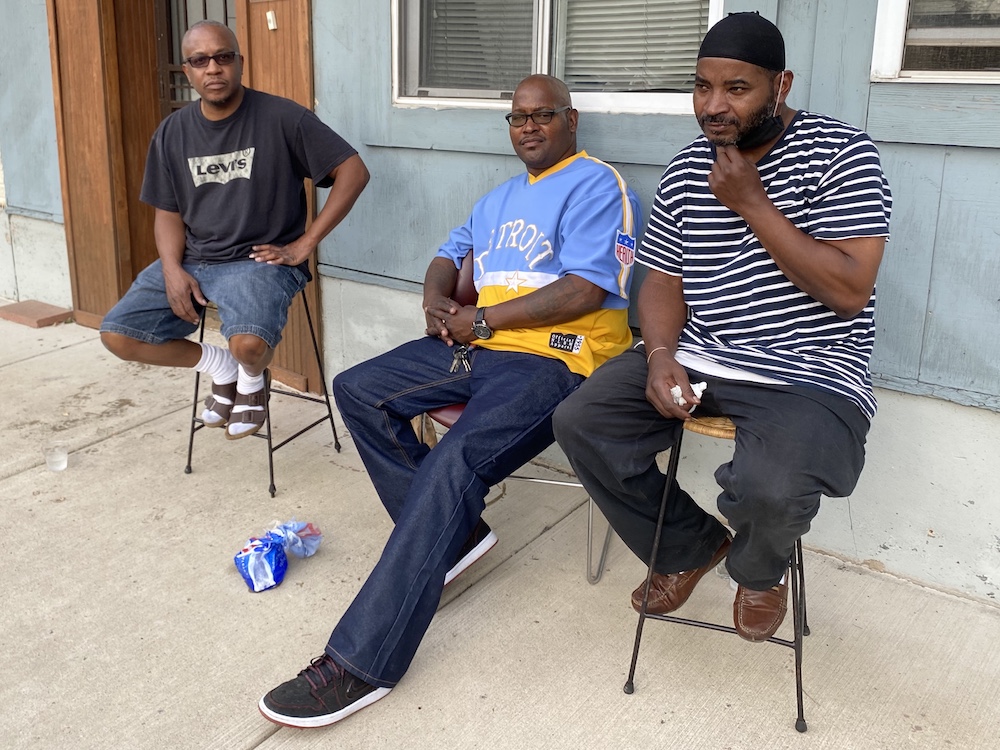 By contrast, his cousins, Gerald Bowles and Marvin Bowles, both in their 50s, have never voted.

“They’re gonna do what they’re gonna do anyway,” said Gerald, speaking of politicians’ failure to keep their promises. “They got their own agenda. It’s all about money.”

Asked if he would vote if the process were made easier — if someone could, for instance, simply show up at his door and tell him to blink once for Trump, twice for Biden — he said no.

The handful of Biden supporters we spoke with had voted in every presidential election since becoming adults, and said they were excited specifically to cast a ballot against Trump.

“I will take anybody,” said Kim Shahid. “I don’t know one Black person who likes Donald Trump.”

To the 60-year-old and her sister, the president is a “racist bully,” who they believe may have failed to properly address the pandemic because it disproportionately hurt people of color.

When asked what they liked about Biden, the sisters said they felt he would represent a return to the status quo and do more to address the pandemic. They hoped he’d implement a federal mask mandate, but trusted him to do the simple things — like wear a mask at all. 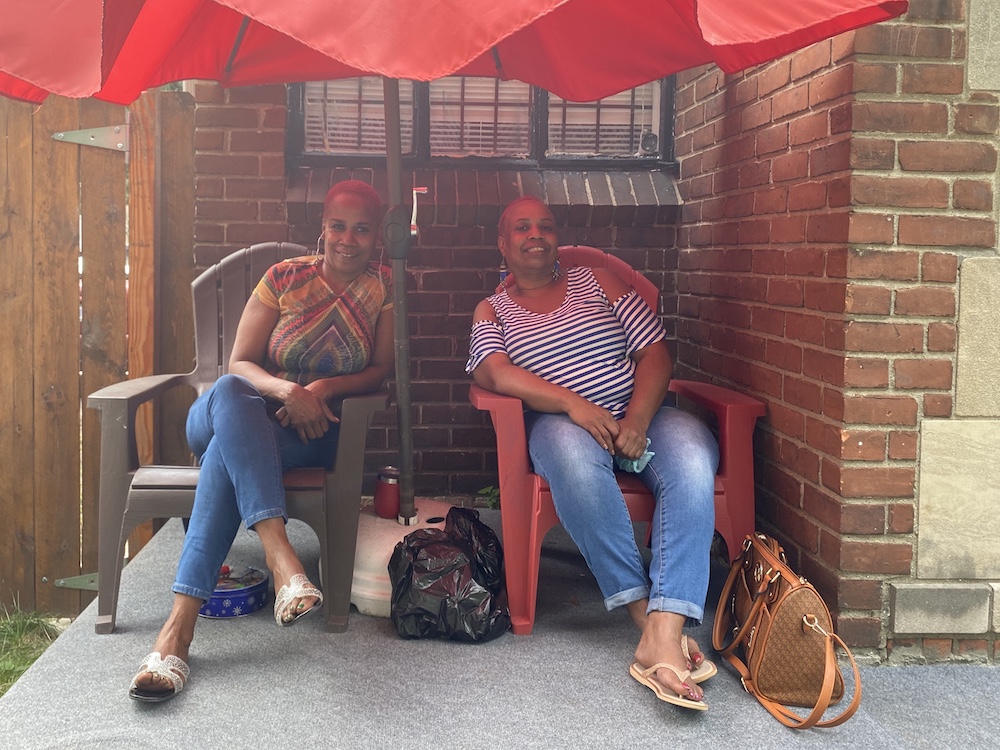 But political disillusionment in Detroit could spell trouble for Democrats in future elections with less divisive opponents, particularly if the party keeps running candidates who don’t garner much enthusiasm.

Experts say additional effort must be made to reach disengaged voters, particularly as the party further establishes itself as one of diversity, and with people of color on pace to soon constitute a majority of the U.S. population.

“There is this challenge for Democrats that … even if they have a demographic or numerical advantage, it’s limited by the lower tendency of non-white Americans to turn out to vote,” says Jesse Rhodes, a professor of political science at UMass-Amherst. “And that’s not a criticism of those people, it’s rather that it’s reflective of the party’s and political organizations’ failure to ... include them in politics in the same way they do whites.”

The Biden campaign, for its part, recently said it would expand its digital-heavy strategy to include socially distant door-knocking in Michigan, including Detroit. The campaign says those efforts will target some low-propensity voters, though it would not immediately say how many. It's also coordinating with organization's like Snyder's to reach them.

Snyder says the most effective way to engage this group is through so-called deep-canvassing, in which prospective voters are asked to share their personal experience with an issue and then told how a specific candidate’s plans could help them.

But both he and Rhodes concede such outreach strategies are limited in the long-term by whether candidates keep their promises.

“They have to listen to what people want, incorporate that in their platform, and when they win, actually deliver,” said Rhodes. “And that’s a real challenge … because doing things is really hard in the American political system.”