Gov. Gretchen Whitmer, in her public reaction to the alleged plot to kidnap and "possibly kill me," spoke out against President Trump. He emboldened and encouraged would-be terrorist militia members like those accused of targeting her. 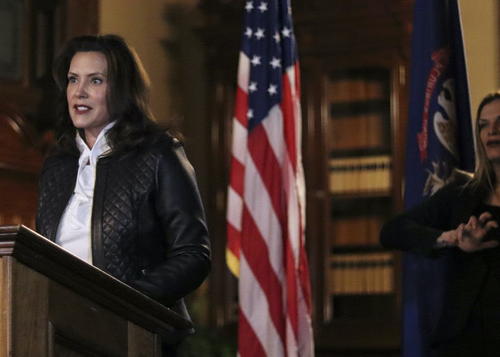 Whitmer reacts to the kidnap plot. (Photo: State of Michigan)

Trump has "refused to condemn white supremacists," Whitmer said in a short statement Thursday, after which she took no questions. "He said to 'stand back and stand by.' Not a rebuke, but a rallying cry. When our leaders speak, their words matter."

Trump tweeted "LIBERATE MICHIGAN!" on April 1 and described armed militia members at the Capitol in Lansing a day earlier as "very good people [who] are angry." (Two of the rifle carriers who entered the chamber, 38-year-old twins Michael and William Null, are among defendants charged Thursday.)

White House press secretary Kayleigh McEnany reponds in a statement: "President Trump has continually condemned white supremacists and all forms of hate. Governor Whitmer is sowing division by making these outlandish allegations. America stands united against hate and in support of our federal law enforcement who stopped this plot."

That prompts this tweet by Michigan's lieutenant governor late Thursday afternoon: "Last time I checked, calling them 'very good people' does not qualify as condemnation."

News broke Thursday of the plot to kidnap Whitmer. Federal and state authorities announced charges against 12 Michigan men and one from Delaware. The group began plotting in early 2020 to take action against the governor, and speculated on various plots to "snatch and grab" Whitmer at a summer residence. They allegedly wanted to take her to Wisconsin for a "trial."

Whitmer said that when she took the oath of office in January 2019, "I knew this job would be hard. But I never would have imagined anything like this."

"If you break the law or conspire to commit heinous acts of violence against anyone" in Michigan," the governor said, "we will find you, we will hold you accountable and we will bring you to justice."

Whitmer condemned "hatred, bigotry and violence" and concluded by promising: "I will never stop doing everything in my power to keep you and your family safe. … Never forget that we are all in this together. … Give one another a little grace."