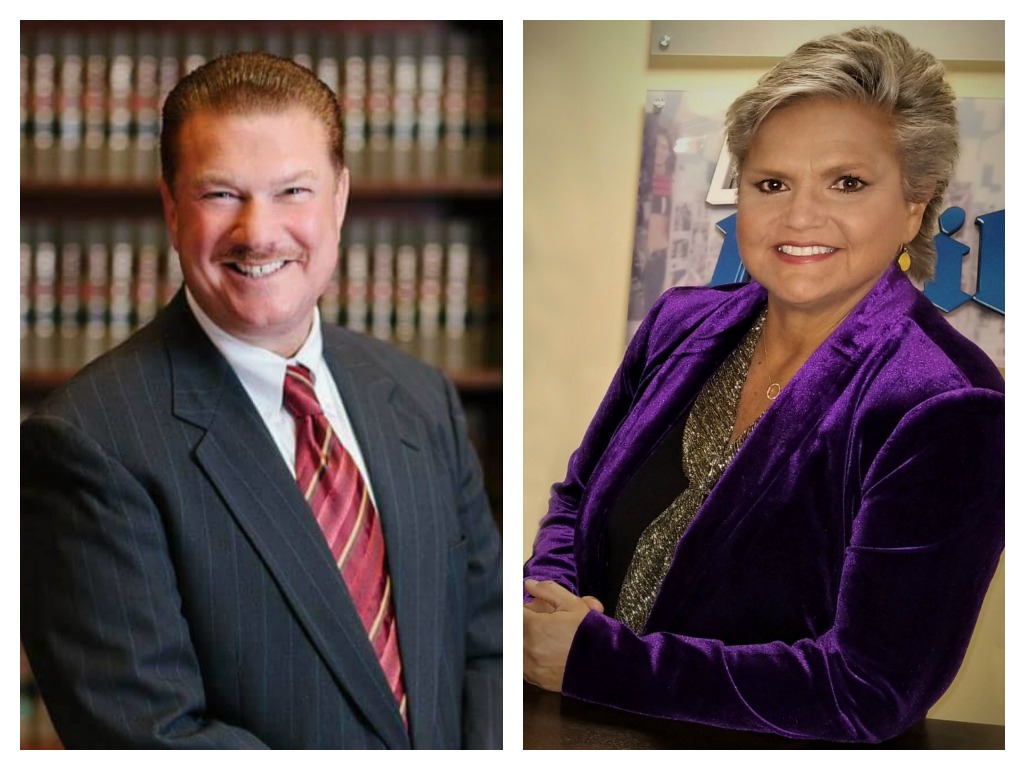 Macomb County Prosecutor Eric Smith is leaving office in disgrace after 16 years, trailing indictments for embezzlement and official misconduct. The vacancy is an opportunity for two candidates, both well-known in the suburban county north and east of Detroit.

The Republican candidate is Peter Lucido, a state senator and divorce lawyer recently disciplined for rudeness toward women. The Democrat is Mary Chrzanowski, a former circuit judge, TV celebrity and recovering alcoholic known as “Scary Mary.”

Both are opinionated, outspoken and intimidating. Both vow to reform a county known both as a national presidential barometer and also as a festering nest of private and public crooks.

Lucido, in a recent interview in his Clinton Township office, said Macomb should clean up its own mess without waiting for the federal government or the state.

“We’ve seen total corruption over the last 30 to 40 years in the county,” Lucido said. “And not one person has been called out and prosecuted (by the county). We’ve always had to get the feds in here. We should handle our own business in our own county.”

To do so, he said he would establish an elite “ethics and corruption unit” in the prosecutor’s office to take tips from citizens and police departments.

But Chrzanowski said the web of connections in this 874,000-person county makes local discipline unrealistic.

Referring to Lucido’s plan, she said: “Well, now, that doesn’t make any sense at all. If you’re going to investigate corruption within the county, you don’t establish a committee of people who reside in the county and work in the county. You go outside the county and you look to your neighboring jurisdictions. There needs to be independent, virgin eyes.”

Since August's primary, Lucido and Chrzanowski have kept the mud-slinging to a minimum, but that may be changing in the campaign’s closing weeks.

In a mailed attack ad, Lucido recently charged that Chrzanowski – early in her professional legal career -- was fired as an assistant Macomb prosecutor after six months for demanding free food and coffee at a McDonald’s restaurant in Clinton Township.

In a telephone interview, Chrzanowski confirmed the story but said the incident was misconstrued because she spoke in jest at the restaurant to make a point.

“I was offended by a police officer who was receiving free food,” she said. “I made a comment to somebody that was misinterpreted, that I wanted free food . . . I’m not going to re-hash something that happened 33 years ago. This is ridiculous! I was a kid at the time. People change.”

Another major change came when she gave up alcohol in 2002, during her 24-year run as a judge in Macomb County Circuit Court. It happened, she said, after the death of her widowed mother, who ran the family’s funeral home.

Fifteen years before that, when Chrzanowski drove under the influence on Christmas Eve, she crashed into a parked car and injured her mother, who suffered a cut on her forehead that left a scar. The scar, Chrzanowski has said, was visible on her mother’s face in the casket.

On the bench, she earned the nickname “Scary Mary” for her harsh treatment of substance abusers who refused to reform despite her tough love.

As for her nickname, she said she learned of it from an African-American defendant.

“The white folk in prison, they call you `Scary Mary,’” he told her. “But the Black folk, we call you `The Showstopper.’”

When she asked the man what that meant, he replied: “We truly are afraid of you. You don’t take any crap from anybody. You see through all our lies. And that’s what makes you scary.”

Lucido also can intimidate. A man of sturdy build, strong voice and slicked-back hair in the Jimmy Hoffa style, he is the subject of an infamous photograph taken at a Donald Trump rally in Sterling Heights two days before Trump’s 2016 presidential election.

In the picture, taken by Getty Images, Lucido is seen with mouth open wide, teeth bared, eyes narrowed to slits. The pose suggests a loud, emotional combination of joy and anger – much in the spirit of many Trump rallies.

In another Trumpian touch to his image, Lucido was disciplined in March by the state Senate after three women accused him of inappropriate behavior involving touching, gazing and comments..

The allegations arose in January after Allison Donahue, a 22-year-old of Michigan Advance reporter in Lansing, said Lucido told male high school students from Warren De La Salle Collegiate that they “could have a lot of fun” with the reporter as they toured the Capitol. Two other women -- a lobbyist and Sen. Mallory McMorrow, D-Royal Oak -- came forward to describe unpleasant encounters with Lucido.

The Senate removed him as chair of the Advice and Consent Committee but allowed him to continue as chair of the Judiciary and Public Safety Committee. Lucido was told to “participate in additional training.”

Lucido said “everybody went through the training” and that he was not singled out. The allegations still bother him and he offered a lengthy defense.

“They found absolutely no wrongdoing,” Lucido said. “They called it something about workforce or workplace something . . . There’s a set policy about what’s called sexual harassment. They didn’t find sexual harassment . . . But, because three people made a statement, they went and said, `Well, there must have been something here.’ That’s not the way the law works.“

Lucido was asked if generational differences might have been a factor in that young women of 2020 react differently to male behavior that might have seemed merely friendly -- to men, at least -- in decades past, when he was younger.

“Absolutely,” Lucido said. “Even with my own children, what comes out of my mouth, they think sometimes it’s borderline inappropriate. There may be a disconnect on how it’s said, and how it was interpreted and received.”

But he added that he has employed “about a hundred different females” in his law business and has represented thousands of women in legal matters. “I’ve never been `outed-out,’ as they call it, until I got to the state capital to give public service,” he said.

Lucido is married and the father of two daughters and one son. Chrzanowski has never been married. She grew up in Detroit and attended St. Ladislaus, a Catholic high school in Hamtramck before graduating from Wayne State University and the University of Detroit law school.

After retiring as a judge in 2016, she went on dates arranged by her female co-hosts for a television show called “Face the Truth.”

“That was just them trying to set me up on a date for television purposes,” she said. “I went out with a couple of the gentlemen they set me up with.” Nothing came of it, she said, because the TV studio and the gentlemen were in California and she lives in Harrison Township.

“Geographically,” she said, “it wasn’t going to work.” 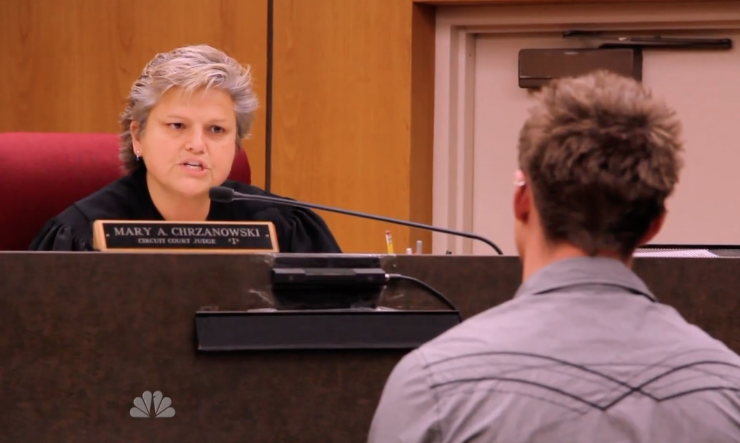 In addition to “Face the Truth,” Chrzanowski has appeared with “Dr. Phil.” Her television persona emerged in 2014, after NBC’s “Dateline” spent three months in her courtroom to document her work with addicts in Drug Court.

NBC cameras showed Scary Mary – her hair short and neat around a wide face, her physique solid -- lifting weights and riding a bicycle. Another scene showed her facing off in her courtroom, in front of the bench, against an addict.

“You want to be a tough guy?” she said to the young man, waving a finger in his face. “Feel these muscles. You get one punch with me.” And, with NBC’s Lester Holt, she candidly discussed her relationship with alcohol, calling it “my best friend” until she quit.

Lucido, who grew up in St. Clair Shores, said he learned good work habits as a boy when he would wake up at 1 a.m. and drive to Eartern Market with his father to pick up produce to distribute in Macomb County.

He’s enthusiastic when discussing those predawn drives with his father and, later, his brother.

“It was hard work, but it was time we spent on the truck together,” Lucido said. “And it was an honest day’s work. We used to make people happy when they ate peaches and plums and watermelon.”

Recalling produce work, Lucido added: “You got 60 corn to a burlap sack. Burlap sack was a dime. A bushel was a quarter -- if it was a clean one -- or 20 cents, if it was a dirty one.”

His work had rewards.

“That’s how I got my coffee or my hot chocolate and my donut stick,” he said, “by selling a bushel and a burlap sack every morning.”

When his father asked his son how much he liked it, Lucido said he told him “I do like it, but I’d rather do something else than get out of bed at 1 o’clock.” To this, his father replied: “If you want to do something better, get educated.”

His finances have improved considerably since then, and his campaign appears well-funded.  A cursory survey of yard signs in Macomb would indicate that Lucido has outspent Chrzanowski in that department.

She charged that Lucido is using money raised when he was a state representative from 2015 to 2018 and, since then, as a senator from Shelby Township.

“When you have the ability to continue to raise funds, that breeds contempt and corruption,” she said.

Lucido’s mailer attacking Chrzanowski says, among other things, “she admitted to being `characterized as a stupid, drunken idiot,’” and that “she is already collecting a pension from Macomb County and is now looking to double-dip” and that “Mary has lied and misstated the truth about Lucido, and should be held accountable.”

In addition, she added: “I have never been publicly censured by the Judicial Tenure Commission, ever. He has been by his own people in the state Senate.”

Both candidates have strong name recognition in the county, but the Republican Lucido is up against this reality: In 2018, Michigan elected Democratic women as governor, attorney general and secretary of state.

Perhaps as a signal of ground he needs to gain, Lucido has demanded a debate with Chrzanowski. In his mailing, he is pictured behind a lectern, next to an empty one.

Lucido said he told the county bar association “What is the date and the time and the place? I will be there. I truly believe that meaningful dialogue and debate is what the public needs.”

Chrzanowski confirmed that she was contacted by the bar association.

“I said I was not interested,” she said, “and their comment to me was `Well, great, because Pete doesn’t really want to have one.’”

Even without a formal debate, Macomb voters know they will choose between two strong-willed candidates.

“I’m a very passionate, very determined person,” Lucido said. “I care about and love this county . . . I was home-grown, born here in Macomb. No one can take that away.”