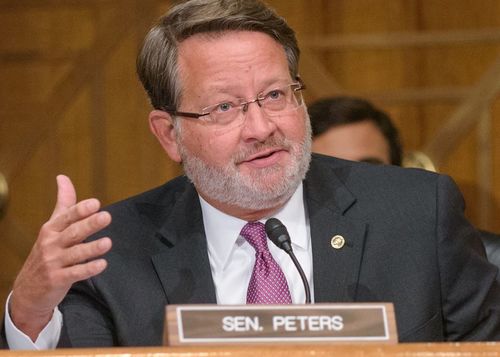 Sen. Gary Peters: "The mental anguish someone goes through is intense."

Sen. Gary Peters, who's running for a second term, is going public with the story of his ex-wife's abortion as the Senate opens confirmation hearings for Supreme Court nominee Amy Coney Barrett, who was a member of a "right-to-life" group and once signed a letter opposing Roe V. Wade.

In a piece published Monday in Elle, Peters explains how the late '80s abortion saved his then-wife Heidi's uterus and possibly her life.

Heidi was four months along when her water broke, leaving the fetus without amniotic fluid—a condition it could not possibly survive. The doctor told Peters to go home and wait for a miscarriage to happen naturally.

But it didn’t happen. They went back to the hospital the next day, and the doctor detected a faint heartbeat. He recommended an abortion, because the fetus still had no chance of survival, but it wasn’t an option due to a hospital policy banning the procedure. So he sent the couple again home to wait for a miscarriage. “The mental anguish someone goes through is intense,” Peters says, “trying to have a miscarriage for a child that was wanted.”

The miscarriage did not occur, reportedly putting Heidi at risk of losing her uterus within hours and possibly her life if she were to become septic from the uterine infection. But the two were able to quickly get into another hospital because they were friends with its chief administrator.

The whole experience was “painful and traumatic,” Heidi shared in a statement. “If it weren’t for urgent and critical medical care, I could have lost my life.”

Reflecting on the experience now, Senator Peters says it “enacted an incredible emotional toll.” So why go public with it? “It’s important for folks to understand that these things happen to folks every day,” he explains. “I’ve always considered myself pro-choice and believe women should be able to make these decisions themselves, but when you live it in real life, you realize the significant impact it can have on a family.”

Peters is said to be the first U.S. senator to share an abortion story.