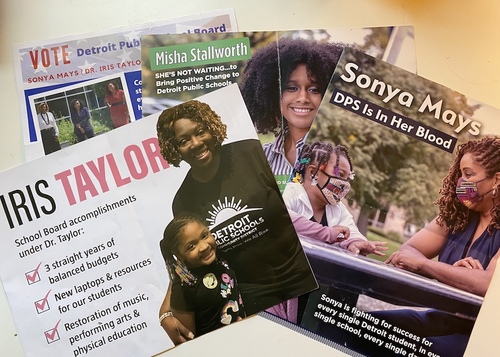 Dark money is flowing into the race for three open Detroit school board seats, with hundreds of thousands of dollars in estimated contributions fueling the re-election bids of board president Iris Taylor and members Sonya Mays and Misha Stallworth.

The three so-called Achievement Slate candidates have the support of Superintendent Dr. Nikolai Vitti in a crowded contest that’s the second since local control was restored to the district following years of emergency management.

Vitti confirmed he recently introduced the incumbents during a virtual fundraiser. An official with the Duggan administration also helped raise money for the three, according to a source with knowledge of the situation.

The slate has been criticized as a rubber stamp for Vitti’s agenda, though the candidates say their cooperative relationship with the superintendent has brought improvements to the district, including growing enrollment and improved test scores.

One challenger, state Rep. Sherry Gay-Dagnogo, complained the dark money is essentially “fixing” the game, making it nearly impossible for other candidates to compete.

“It’s the puppet master again,” said Gay-Dagnogo, a former teacher who is term-limited in the Legislature. “It’s Duggan manipulating the system to maintain his control.”

A spokesman for the mayor denied Duggan’s involvement in the race, but declined to say whether administration officials helped raise money for the candidates. Duggan has endorsed Taylor, who spokesman John Roach said the mayor considers a “close friend.” The two worked together at Detroit Medical Center, where Duggan was CEO and Taylor ran Detroit Receiving Hospital.

Mays is a non-profit developer who worked under former Emergency Manager Kevyn Orr and Stallworth has coordinated senior programming for non-profits. Her father and grandmother were state lawmakers.

The re-election effort is being run in conjunction with another dark-money fueled campaign to pass a $250 million bond referendum to address blight in the city. The two efforts share a post office box, advertising agency, and staff, who are passing out flyers outside early voting sites for both campaigns. The P.O. box is also used by a Detroit Regional Chamber-connected super PAC. The chamber has in the past spent big on mayoral initiatives and conservative causes, including an attempt to thwart pot legalization in 2018. 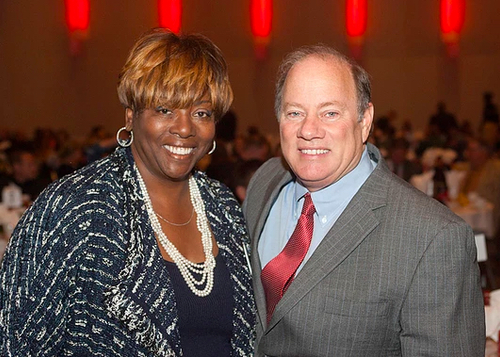 A spokeswoman for the regional chamber said the group is not involved in either dark money campaign but said it supports the mayor’s agenda and has donated directly to Taylor, Mays and Stallworth.

Money for mailers, billboards, and/or television commercials for the incumbents comes from at least three murky sources:

When asked where the funding was coming from, Stallworth said, “We have a lot of support from across the community, from individuals (and) we’ve worked really closely with the business community over the last four years.”

The district has partnered with the area’s biggest corporations and their foundations to implement a number of multi-million dollar projects, including placing hydration stations in schools whose drinking water was contaminated with copper and lead, and tablets for students for remote learning during the pandemic.

Stallworth said contributions to the slate “demonstrate support for the work we’ve done over the last four years and that folks across the community are looking for consistency in leadership moving forward, knowing how critical our schools are to the community.”

She says board members’ decision-making has “not been compromised” by donors, noting that while she has support from a company like Quicken Loans, she voted against selling DPS parcels for a jail Bedrock, part of the Quicken familiy of companies, is developing for Wayne County.

Vitti said that while some candidates other than the incumbents would be a positive addition to the board, the current group has “made tremendous improvements” to the district and that “when a team is beginning to win, you do not upset its chemistry.”

He and the board came under fire earlier this year for allowing in-person learning to resume during the pandemic.

Gay-Dagnogo was among those who opposed that decision. The lawmaker says that, if elected to the board, she would serve as a voice for residents by drawing from her educational background and leveraging her connections in Lansing and elsewhere.

Also running is former school board member Elena Herrada, who served while the district was under state control. She takes issue with what she sees as the board's passive posture, and says that, if elected, she would advocate for increased school funding and an end to development deals that siphon money from the district.

"When they talk about curriculum or classroom size, none of that matters if there’s no money," said Herrada. "So to me the campaigns are a scam. The substance has got to be in the structural funding and how to make it more fair."

This article misstated that Stallworth is a former Detroit public schools student. She is not.