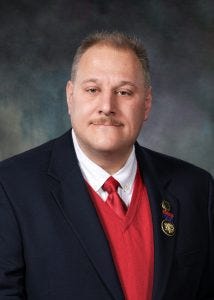 Warren has another wingnut to boast. And this one's on city council.

Councilman Eddie Kabacinski joined pro-Trump counterprotesters at a September demonstration against a string of alleged hate crimes on a Warren family, in which a man shot into their home and sprayed it with graffiti. Kabacinski was reportedly dressed in military gear and had a gun on his hip.

This month, he's said to be back on the wrong side of history, having allegedly handcuffed a 24-year-old counterprotester at a Trump rally for putting Black Lives Matter stickers on Trump signs.

Here's how Kabacinski, whose actions are now under investigation by police, explained himself to C&G News:

Kabacinski later said that he moved to detain the woman he alleged acted to “breach the peace" ...

“Putting a decal sticker over a Trump sign, and it says Black Lives Matter, you are promoting a domestic terrorist organization on a Trump sign and that’s not good,” Kabacinski said. “That’s not the image that the Trump campaign or the Republican Party is trying to convey. We are trying to get back to law and order in this country.”

Warren Mayor Jim Fouts is speaking out against the incident.

“This situation should not have taken place ... We are here to serve and protect our citizens. I’m not quite sure handcuffing a citizen is serving and protecting the citizens.”