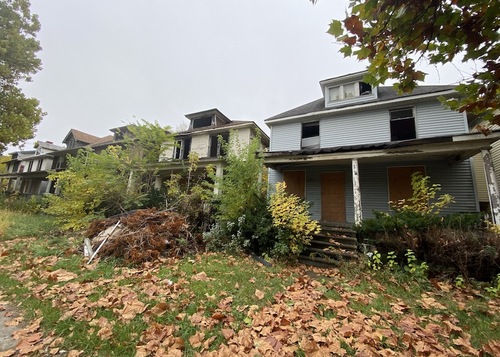 Residents living near a heavily blighted block of Allendale Street, on Detroit's west side, don’t expect new neighbors anytime soon. The overwhelming majority of the block's 50 houses have sat in ruin for years, and only a handful appear occupied.

Purchasing one of the homes is a fool’s investment that would require spending far more than its value to bring it up to code, they say. City records show the average sale price in the surrounding area, northwest of I-96 and Tireman, is $16,000.

And yet, if Mayor Mike Duggan’s proposed $250-million bond referendum to address blight in the city passes next Tuesday, the city intends to spend up to $300,000 of that money securing 20 abandoned houses on this block alone, patching up roofs and covering windows in hopes there will eventually be enough buyer demand to fix up the properties and turn things around. In all, $90 million of the bond will go toward home preservations.

“They need to be tearing them down instead of boarding them up,” said Paul Height, 57, who lives one block over, on Pacific Avenue. “They’re wasting their money.”

It’s not the only area slated for questionable investment. At least half the properties the Duggan administration is targeting for salvage are likely worth so little that experts say it wouldn't make economic sense to fix them up. According to a Deadline Detroit review, of the 7,000 properties deemed salvageable, nearly 3,000 last sold for less than $5,000 before winding up in public ownership, in most cases due to tax foreclosure. At least 3,000 are located in areas where home values have not kept pace with improvements in the city overall.

It's the first examination of many of the abandoned houses to be addressed under Prop N. The investment in preservation was a key selling point for council members who gave preliminary approval to the plan this summer; the body rejected a precursor that put greater emphasis on demolitions.

Though the Duggan administration has previously declined to provide a list of the properties to be addressed, it says it expects to draw from a pool of up to 7,000 Detroit Land Bank Authority houses the agency deems eligible for rehab. Deadline Detroit obtained that list via a Freedom of Information Act request.

“The plan has little basis in reality,” said Joshua Akers, an associate professor at the University of Michigan-Dearborn who studies Detroit’s property market. “The salvage homes portion assumes too many things about the housing market that don't exist or are not true in order to be feasible.

“There are smart people in Duggan's office. They know the cost of development and renovations.”

Peter Hammer, a Wayne State University law professor and head of the Damon J. Keith Center for Civil Rights, called it a "shoot-in-the-dark approach" to neighborhood stabilization rooted in "no economic rationale."

The resolution, however, is not legally binding — meaning the specifics could change. Voters are asked to decide on more vague language that seeks approval for only “neighborhood improvements” through “blight remediation activities.”

If passed, the plan would cost the average Detroit homeowner a little more than $50 per year for about 30 years.

In statements, administration officials vowed to fulfill the promised investment in rehabs, saying they believe there will be enough demand for the houses as market conditions improve with more demolitions.

Arthur Jemison, the city's chief of services and infrastructure, said a recent spike in Land Bank home sales shows growing demand. The agency sold an average of 300 houses per month through its Own It Now auction between July and September, though not all sales are expected to close. It was previously closing on 200 houses per month.

But Jemison said the administration's strategy could be amended if the preserved houses don't sell, and he left open the door for potential bulk sales to developers.

Officials say they have not yet drafted bond documents to go before potential investors, which may determine how much wiggle room the city ultimately has. An expert says these documents can be vague, particularly when there’s significant demand for municipal bonds, as there is now.

As the plan stands, there are two likely outcomes for many of the properties, Akers says: wasting money to clear and patch houses that will eventually require demolition, or selling blighted houses to people who lack the means to finish bringing them up to code.

Jemison has teased several strategies to address these issues and use the program to grow home ownership for Detroiters. According to Detour Detroit, possibilities include an effort to work with banks to develop a loan product that could cover the cost of purchase and repairs — with monthly payments at or below 50 percent of area median income rents. Jemison says he’s also in talks with community development organizations to include them in a loan or gap-funding program they can use for residents in their neighborhoods.

The goal is for the potential programs to serve at least 1,000 people over five years.

But Akers calls the potential mortgage instruments “wild,” noting: “In a number of neighborhoods, the owner will be underwater until it's paid off.”

Neighbors around Allendale do believe homes deemed salvageable could attract buyers if worse-off ones were torn down. But it’s unclear whether the heavily blighted portions of the street will see demolitions.

Proposal N would free up money to demolish only 8,000 Land Bank-owned houses, when, based on previous estimates provided by the city, there could be double that many homes in need of teardown. Duggan said last fall that 19,000 houses in the city required demolition. Since then, 4,000 have come down.

The Land Bank says it bases its salvage criteria on a number of factors, including a structural assessment and neighborhood and market data. In 2019, it began selling in less desirable areas, though the rate of compliance by buyers isn't yet clear. A spokeswoman said it's too soon to tell, as the agency generally allows six months to three years for rehab work, depending on progress, before it takes back a property.

What limited information there is seems to indicate that attempts to bring back homes in the city's more distressed pockets have produced mixed results. Further down Allendale, where many abandoned houses have been torn down, at least two new residents have moved in, fixing up their houses on their own, one resident told us. But a number of houses on the street have had difficulty attracting buyers. Several, on sale for $1,000, have been relisted by the Land Bank multiple times and remain in its inventory.