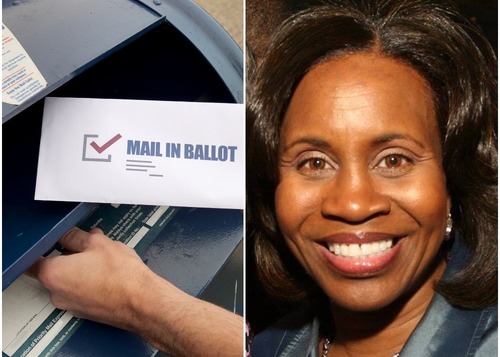 Some Detroit residents still have not received absentee ballots with just days to go until Election Day, despite having requested them weeks ago. Delays appear to be the result of slowdowns in mail service and a late issuance of ballots by Detroit City Clerk Janice Winfrey.

Voters who have not yet received their ballots will likely have to vote in person on or before Nov. 3.

It’s unclear how widespread the problem is; Winfrey did not reply to a request for comment. She told WXYZ that at least 500 ballots issued to residents in northwest Detroit were "lost in the mail." The postal service told the station it's investigating.

The clerk, for her part, allegedly failed to mail 70,000 absentee ballots for three weeks, despite a requirement that clerks send them within 24 hours of receiving notice of a request. The ACLU sued earlier this month and Winfrey's office on Tuesday agreed to meet that requirement moving forward.

State records show nearly 6,000 ballots in Detroit have been spoiled, a required step for voters who request a mail-in ballot but opt to vote in person instead.

A handful of Detroit voters whose ballots were mailed late tell Deadline Detroit they still have not received their ballots or that they received them too late to mail them back in.

Mail delivery delays appear to be compounding the problem. U.S. Postal Service slowdowns were more pronounced in metro Detroit than any major metropolitan region earlier this month, according to a congressional investigation by Michigan Sen. Gary Peters. Just 70 percent of mail here was delivered on time, within five days, compared to a national on-time rate of 86 percent.

Detroiter Nick George is among the voters impacted. A Secretary of State voter database shows his ballot was not mailed until Oct. 10, even though his application was received Sept. 5 and clerks were to begin issuing ballots Sept. 24. He still did not have his ballot as of late Tuesday, and said he now plans to vote in person.

The issues, he added, underscore the need to “properly fund election infrastructure nationwide.”

Another voter who also had not received their ballot despite it having been listed as sent Oct. 12 — four days after their request was received — also planned to vote in person.

One voter whose application was listed as received in July, when the state gave voters the ability to request ballots for both the primary and general elections, did not see his ballot until Monday. Peculiarly, it arrived quickly — four days after the clerk’s office listed it as sent — but just shy of a deadline that ensures ballots returned via mail will be counted.

A spokeswoman with the Michigan Secretary of State’s Office did not respond when asked for details on the problems in Detroit.

Winfrey’s office, which has been accused of mismanaging past elections, is dealing with unprecedented demand for absentee ballots amid the coronavirus pandemic. More than 169,000 Detroiters requested to vote by mail this election cycle, a more than five-fold increase over 2016.

Only about 60 percent of those ballots have been cast, one of the lowest return rates in the state. Neighboring Livonia, Southfield and Sterling Heights all have return rates of 67 percent.

A customer service representative with the city clerk’s office said she's advising voters who have not yet received their ballots to vote in-person at one of the city’s early voting sites or at their local precinct on Election Day. If voting early, the Secretary of State's office says people should request to spoil their first ballot. If voting on Election Day, they will have to sign an affidavit triggering the cancellation of their absentee ballot.

Those who choose to wait for their ballot to arrive are advised to return it to one of the city’s secure drop-off locations; the deadline to ensure mail-in votes are counted has passed.