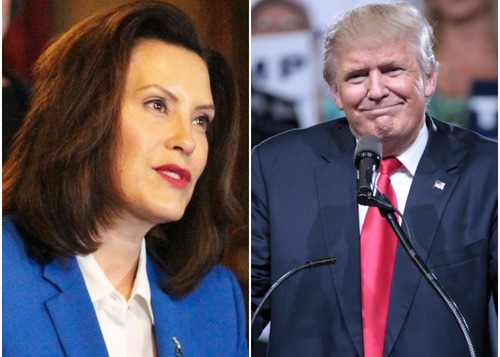 "The past four years have been the worst version of America." -- Gretchen Whitmer.

Whitmer takes on Donald Trump's divisiveness in a new essay in the Atlantic, blaming his violent rhetoric for inspiring an alleged plot against her and revealing she receives a “surge of vicious attacks” every time he takes a swipe.

The 800-word piece, titled "The plot to kidnap me," was published hours before the president prompted another round of "lock her up" chants during a campaign stop in Lansing.

It's as much a condemnation of Trump's "lies, vitriol and hate" — and a warning of far-reaching consequences — as it is an appeal to unity. Whitmer ends by reflecting on a time when leaders "knew that at the end of the day, we are all Americans; we all deserve to be treated with humanity and respect."

The past four years have been the worst version of America. Ever since Donald Trump first stepped foot in the White House, we have moved away from the common ideals and values that are supposed to unify us as a country, putting leaders across the country—including me—in danger. This president has failed our country, and it is on all of us to come together to turn things around. We deserve better.