The events in Ferndale, Brighton, Ann Arbor, Lansing and Grand Rapids were announced earlier on a standby basis. (Details below in earlier post.) This presidential tweet and other premature victory claims turn the signal to green:

I will be making a statement tonight. A big WIN! 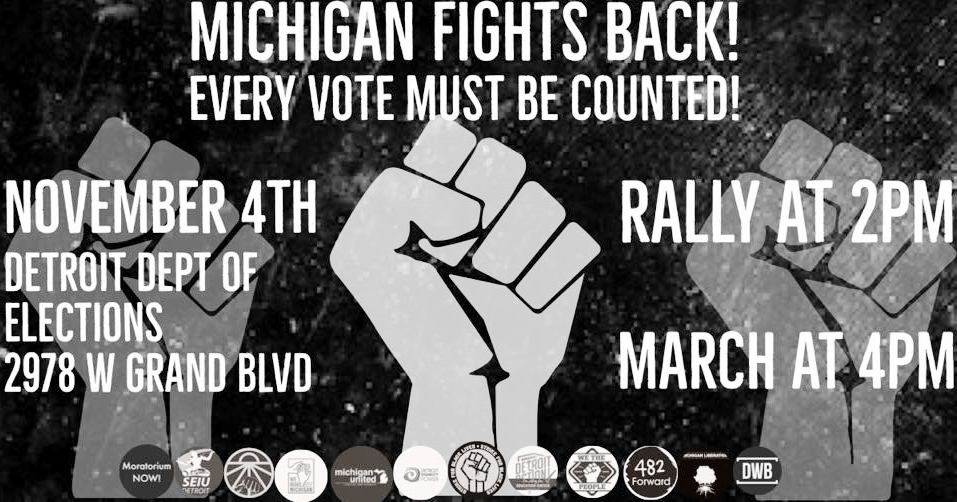 Detroit Will Breathe also schedules events today, starting with a 2 p.m. rally at the Detroit Department of Elections, 2978 W. Grand Blvd., followed by a 4 p.m. march. The demonstrations are co-hosted by the Moratorium NOW! Coalition and the Sunrise Movement Detroit.

"Game on," Paula Martinas of Troy, a "co-host" of Ferndale's gathering, says in a 12:34 p.m. email blast to registrants. "Our Protect the Results Rally in Ferndale is ON for today at 4 p.m. at 9 Mile & Woodward."

Michigan's demonstrations are among roughly 400 nationally, news reports say. They're coordinated by a coalition of more than 130 groups as a part of the Indivisible movement.

"We're going to have to be patient until the hard work of tallying ballots is finished," Joe Biden is quoted as saying. "And it's not going to be over until every vote is counted."

"We are building a coalition of voters ready to mobilize if Trump undermines the results of the 2020 presidential election," organizers post. "The likelihood of activation is high."

The group, part of the Indivisible movement, includes "over 130 groups from Planned Parenthood to Republicans for the Rule of Law [and] has about 400 events planned," Reuters reports. One member, a political action committee called Choose Democracy, frames the mission starkly:

Deter a coup with actions to Protect the Results. We know from other countries that have successfully prevented coups that we need millions of people in streets.

This isn't a fringe fear or far-fetched fantasy. 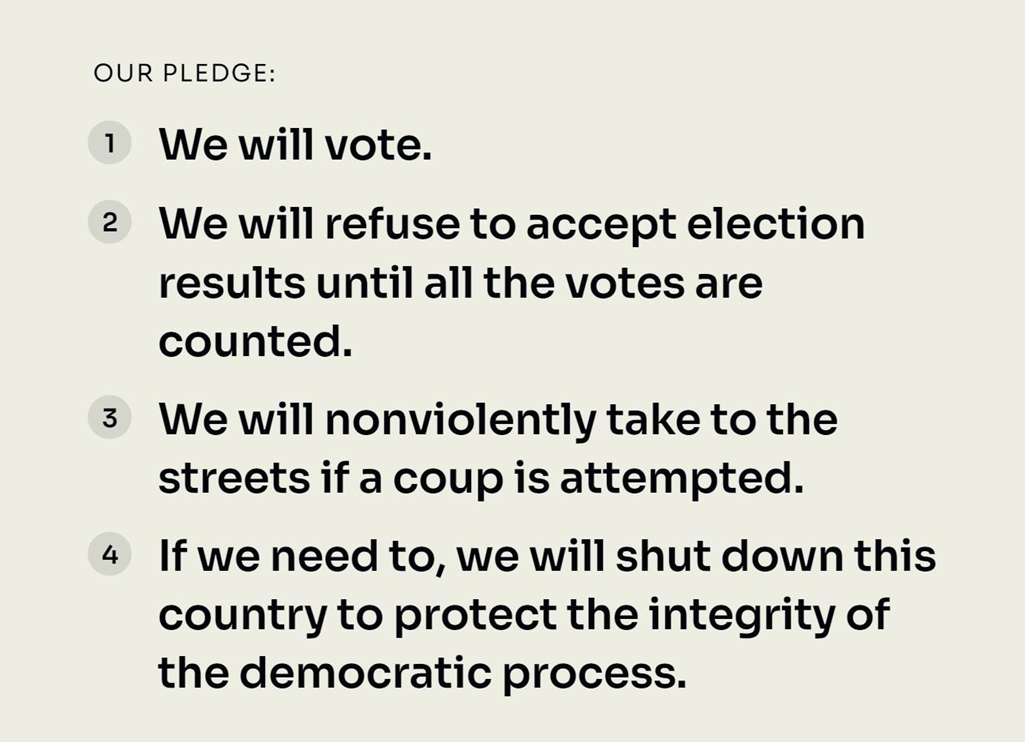 Only eight states expect to have at least 98 percent of ballots counted by noon Wednesday. But the president has repeated his belief that the election's outcome shoud be clear by the end of Tuesday.

"It's a terrible thing when states are allowed to tabulate ballots for a long period of time after the election is over," he said Sunday. “I think it’s terrible that we can’t know the results of an election the night of the election. ... We're going to go in the night of, as soon as that election’s over, we’re going in with our lawyers."

Boston College historian Heather Cox Richardson posts this weekend at her Letters from an American blog: "This is just wrong: The election is not over until a state certifies the results, and no state does that on Election Day."

Under the headline "How Far Might Trump Go?", New York Times columnist Thomas B. Edsall sketches dangerous prospects envisioned by more than a few experts. He quotes Barry Burden, a political scientist at the University of Wisconsin-Madison, about "the most likely scenario" in his view:

President Trump falsely condemns the election as fraudulent and illegal. He will ... claim that millions of absentee ballots were submitted in duplicate or by foreign governments, neither of which will be true. He will intensify his rants against the supposed fraud as Biden's lead in the popular vote grows in the days following the election.

The Nation magazine expects that "on election night, Trump will declare victory and assert baselessly that any ballots counted after Election Day are fraudulent."

He and his Republican allies will then attempt to disrupt the post-election ballot count by launching legal and administrative challenges against ballot-counting and inciting violence against election administrators.

Michigan voters who want to join a display of solidarity can register for text messages Wednesday confirming that events will happen that day in Grand Rapids and these sites:

"We will need to mobilize on short notice," says an email blast Sunday night. "Therefore, we are proceeding as if there will be an event."

The goal is to show wide resistance to ballot-counting impatience or obstruction efforts. Coordinators post:

We cannot ignore the threat that Trump poses to our democracy and a peaceful transition. We will stand together to ensure that if Trump loses the 2020 presidential election, he will not throw our country into a constitutional crisis.

We will honor the valid results of the 2020 election, ensure that every vote is counted and show up to demand that the losing candidate put their ego aside and concede for the good of our country.