The author is a Metro Detroit freelancer and a former Detroit Free Press reporter. 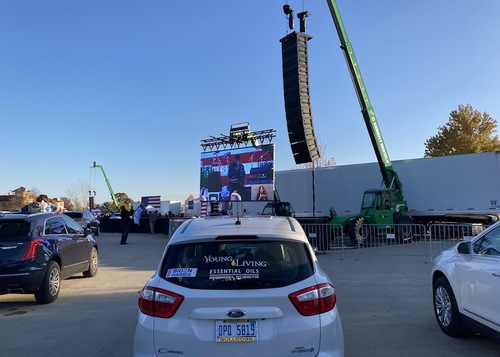 On Belle Isle at a Joe Biden car rally on Halloween, a huge golden sun set behind the Renaissance Center across the river, and Stevie Wonder told the crowd a dear friend of his had just died of Covid. Then he sang his hit from 1973, “Higher Ground,” that somehow presciently nails this year of suffering, turmoil, and fatal foolishness.

Powers keep on lyin’, yeah,
While your people keep on dyin’

Thanks to a friend, we were among the lucky hundreds invited to the hastily organized campaign event. We waited hours in idled traffic, needlessly fretting that some Trumpian caravan would try to disrupt it, but the state police and event organizers had the island locked up tight.

We got out of our car and were patted down by Secret Service as we drove into the 10-acre paddock built for Roger Penske’s Grand Prix on land that was once a memorial grove for Detroit children slain by gun violence.

It seemed ironic, since Donald Trump gave Penske the Presidential Medal of Freedom just a year ago.

The event — a hybrid drive-in movie, revival meeting, and masked ball that’s entirely a creature born of the pandemic — used horn honking to simulate audience response. Wonder went on just before the limo
caravan coming from Flint arrived with the star speakers — a former president and vice-president.

As the sun sank and a chill wind blew across the river from Windsor, Barack Obama, always aware of where he is, gestured to the south while noting how Canada had logged its first coronavirus case the same day as we did but how differently the pandemic has been handed there.

Obama had plenty to say about White House diffidence and cowardice in the face of crisis. Even a five-minute-long sound system glitch didn’t drive him from the podium. Both he and the Democratic nominee stood firmly in the wind and spoke out against division, fear, and chaos.

Nobody flinched or ducked. We did all we could: we honked horns.

As Joe Biden stepped away from the microphone and our cars started driving east out of the paddock, a huge yellow moon rose right in our faces. Stevie Wonder’s voice echoed in our heads.