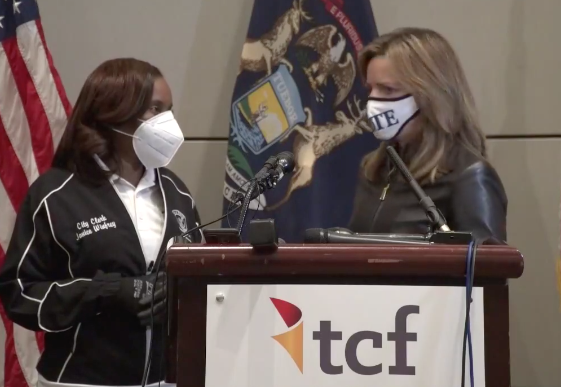 Detroit voter turnout is expected to reach between between 53 and 55 percent, city elections officials said Tuesday night, matching or exceeding the city's 2008 high-water mark and boding well for Joe Biden's chances in Michigan.

Detroit is expected to be key to a Democratic victory in the state and could signal strong support for Biden among Black urban voters throughout the upper Midwest.

Turnout in the last two presidential elections has waned since the city set a modern-era record with 53 percent of eligible voters casting ballots in Barack Obama's first presidential race in 2008. Low turnout in the city cost Hillary Clinton the state in 2016.

City Clerk Janice Winfrey also said Tuesday that she expects to have 100 percent of election results by around 8 p.m. Wednesday.

As of 9 p.m. Tuesday, with 32 percent of Michigan's vote estimated to be counted, President Donald Trump was leading Democratic challenger Joe Biden by 995,970 to 743,602. The race was far too early to call.

Both candidates logged quite a few hours in Michigan in the final stretch of the campaign, with President Trump finishing up with a rally late Monday night in Grand Rapids that went into early Tuesday morning.

Trump won Michigan by 10,704 votes in 2016, as more than 40,000 fewer voters turned out in Detroit than in the presidential election prior.

But in 2018, the state saw a blue wave in the midterm elections, with Gretchen Whitmer soundly defeating Attorney General Bill Schuette. Democrats are again hoping for a repeat of 2018.

Michigan has 16 electoral votes and is considered a must-win for Biden, along with Wisconsin and Pennylvania.