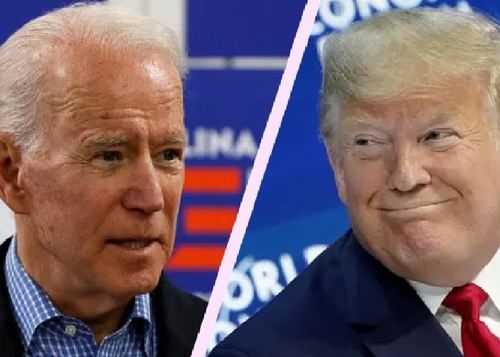 Biden was leading President Trump by 61,237 votes with an estimated 97 percent of the votes counted.

Michigan's 16 electoral votes push Biden to at least 253 by most media counts, meaning he needs just 17 more to become president-elect. Results are awaited from Pennsylvania (20), Georgia (16), North Carolina (15) and Nevada (6).

"When the count is finished, we believe we'll be the winners," Biden said Wednesday afternoon.

In the state's ultra-tight U.S. Senate race, Gary Peters was ahead by 59,587 votes (1.1%) around 8 p.m. with 98 percent of precincts counted. NBC News, CNN and other projects him as the winner, and he declared victory Wednesday night..

Joe Biden has taken a narrow lead over Donald Trump in Michigan, with 50.3 percent of the vote to Donald Trump's 49.7 percent, as turnout in the state exceeds 2008 totals.

Chris Thomas, an adviser to the Detroit clerk’s office, said around 11 a.m. that about 25,000 absentee ballots from the heavily Democratic city still need to be counted at TCF Center, according to Michigan Advance.

Biden had been closing in on the president in the hours since polls closed. He's heavily favored by absentee voters, New York Times data shows.

Earlier Wednesday, Trump claimed victory in the key southern states of Florida, Georgia and North Carolina, even though the latter two remained too close to call. If he does indeed win them, Biden will have to secure Michigan and the upper Midwest to get to 270 electoral votes.

Trump also vowed to fight the results in the U.S. Supreme Court.

“We want all voting to stop," he said. "We don’t want them to find any ballots at 4:00 in the morning and add them to the list.”

"Counting will not stop," Dillon said.

In Michigan's U.S. Senate race, first-term Democratic Sen. Gary Peters edged ahead of Republican businessman John James with a razor-thin margin of 1,020 votes: 2,549,806 to 2,548,786, with about 92 percent of the estimated vote reported. But that lead didn't last very long.

Michigan Secretary of State Jocelyn Benson said Wednesday that about 100,000 ballots from major areas like Detroit, Grand Rapids, Flint and Kalamazoo still need to be counted. She said she expected legal challenges, but noted she's focused on making sure every vote is being processed properly.

The state could have final results as early as Wednesday night.

Shortly before 1 a.m., Joe Biden told supporters, "we feel good about where we are" and  "we're feeling real good about Wisconsin and Michigan." A Washington Post reporter tweets: