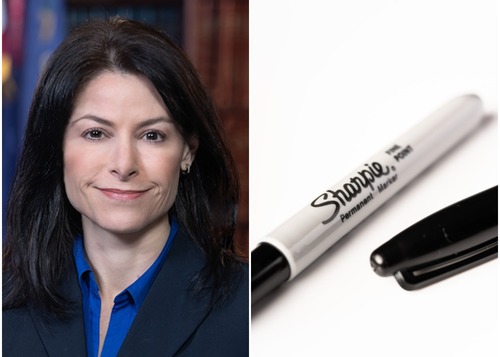 Unsubstantiated claims of election fraud have translated to unsavory and threatening calls to the Michigan Attorney General's Office, as Trump supporters respond to what a spokeswoman characterized as a Facebook call-to-action.

Attorney General Dana Nessel urged the callers to stop in a Thursday afternoon tweet. She shared details of one gruesome comment that instructed staff to "shove Sharpies in uncomfortable places."

Dear members of the public: Please stop making harassing & threatening calls to my staff. They are kind, hardworking public servants just doing their job. Asking them to shove sharpies in uncomfortable places is never appropriate & is a sad commentary on the state of our nation.

In an email late Thursday, Rossman-McKinney described the calls "as rude, crude and totally unacceptable crank calls at a higher volume than usual."

The majority were coming from Michigan residents. All, she said, were election-related, with some asking the office to investigate the long unsubstantiated yet ever-popular claim of dead people voting. Others focused on what she called "sharpiegate," an apparent conspiracy theory that alleges poll workers tricked Trump supporters into invalidating their ballots by giving them felt-tipped markers.