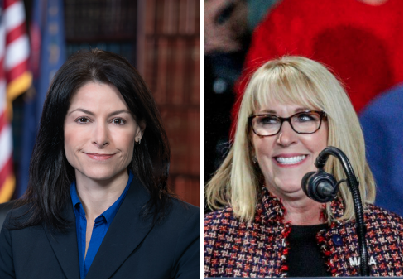 Cox suggests Nessel investigate. Nessel, who is skeptical of the GOP's attempt to discredit the election, doesn't see it that way.

"Scoffing at MIGOP attempts to ensure ballot integrity, AG Nessel is showing the bias that is present for GOP in MI," Cox tweeted. "This is the same bias that our challengers faced at TCF.There needs to be impartial examination of what happened this election by more than Biden endorsed officials."

Nessel shot back that Wayne County Prosecutor Kym Worthy was capable of investigating any allegations of fraud in Detroit.

"If it's an impartial review of evidence of a crime you seek, it seems the trusted county prosecutor, who has never shied away from pursuing charges against other Democrats, would be the appropriate law enforcement official to conduct such an investigation," Nessel responded.

Trying to understand why you have such high regard for Wayne Co. Prosecutor Kym Worthy you used her pic & quote on your campaign lit for your 2018 MI Senate race, but don't trust her enough to refer the alleged voter fraud you discovered in Detroit for her to investigate. https://t.co/dfMy2S5r4u pic.twitter.com/mlqVp8vRPv

Twelve hours earlier, Nessel tweeted: "If you have actual evidence of voter fraud, you should contact law enforcement, as it’s a crime which is taken very seriously. If you have ridiculous conspiracy theories unsupported by facts or reality, by all means contact the @MIGOP."

The arguments come as President Trump and GOP supporters push the narrative that there was widespread voter fraud, even though they've presented no evidence.

As disgusted as I am by these sham legislative hearings designed to impugn the integrity of our elections, I look forward to @JocelynBenson, Jonathan Brater, Chris Thomas and other actual election experts schooling this committee on the security of our election processes.