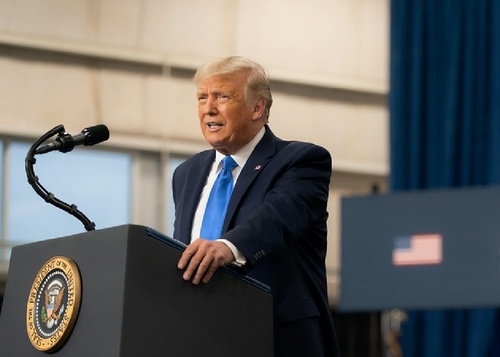 The Trump campaign's latest lawsuit over Michigan's election results is full of seemingly frivolous and trivial claims, including that poll challengers were required to stand six feet from the action, as per Covid guidelines.

The suit filed in federal court in Michigan's western district aims to stop the certification of the election until the campaign is comfortable votes were cast properly.

It's one in a flurry of legal challenges being brought in Michigan and other key battleground states as Trump and his supporters level election-fraud claims that are either unsubstantiated, disproven, or stem from isloated and largely inconsequential human errors.

The Free Press went through more than a hundred pages of affidavits detailing the "problems":

The most common complaints cited in the affidavits relate to allegedly being obstructed by or feeling intimidated by election workers at the TCF Center in Detroit, where absentee ballots cast in the city were counted. Some people say this obstruction made it difficult or impossible to observe the counting.

Others say election officials cited COVID-19 guidelines and asked them to stand six feet away from poll workers. While some said this made it difficult to monitor what some election workers were doing, others made very specific allegations about what they say they saw.

Andrew John Miller said he was repeatedly blocked from viewing workers who were duplicating ballots, a standard process in place if a tabulation machine is unable to read a ballot.

The campaign has conceded the case may not on its own change the outcome of the state's election results, which show Trump lost by 146,000 votes, "but a large part of these lawsuits is to gather further information," campaign spokesman Tim Murtaugh told the Freep.

The first lawsuit brought by the campaign last week was tossed by a judge. Another, brought by GOP poll challengers in Detroit, relies on a "grab-bag of falsehoods" and is "grounded in an extraordinary failure to understand how elections function," the city wrote in a response Wednesday.

MLive reports the city countered by explaining how the complaints were false or misleading:

For example, the plaintiffs argued they were told not to verify signatures on absentee ballots. That’s true, the city of Detroit said, because the signatures were already verified by clerks before coming to the counting center, as mandated by law.

Claims that Republican poll challengers were denied meaningful access are false, as multiple witnesses said there were an abundance of them at the TCF Center. Once capacity was reached, officials did stop allowing in more challengers until a challenger of their party exited.

Plaintiffs also argue a bunch of unsecured ballots showed up at the TCF Center overnight. Those were not filled out ballots, but blank ballots delivered to the TCF Center for the purposes of processing ballots that were damaged or required duplication because the original couldn’t be processed.

The plaintiffs also claimed that ballots received late were being backdated. City and state officials said there was a “clerical error” where the date stamped on absentee ballot envelopes wasn’t entered into the system like it should have been.