The day of the Nightcam: Detroit’s Local 4 roaming reporter covers the sundown city 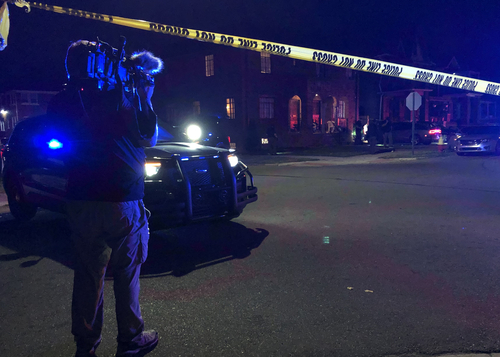 For a while there, it looked as though the night would be a bust.

A quick trip to the east side, on news of a 2-year-old hit by a car, turned into not much of anything. The driver stopped; the little girl was probably going to be OK. A rollover accident on I-75 was promising, but you could see the driver awake and talking on the stretcher as he was wheeled to the ambulance. In a city with so many freeways, a car crash has to be fatal to make the news, or at least a lot more interesting than a one-car rollover.

Of the shooting in Highland Park we will say very little. A man was walking, heard a shot and felt pain in his hand. Just another unlucky pedestrian.

But Tim Pamplin got his shots anyway. As the one-man band known as the Nightcam, it’s his job to get something. Reporting the news is a fickle business, feast or famine most days, and if tonight would be famine, he still might have to contribute a few scraps to the 11 p.m. newscast on WDIV, aka Local 4. The 2-year-old might take a bad turn. The rollover victim, ditto. You never know.

But, he said, “I have a feeling about tonight.”

Don’t doubt the Nightcam’s feelings. He’s been doing this a while.

Growing up in Cambridge, England, Pamplin watched “It’s a Knockout” on the telly, a goofy competition show that required teams of adults to perform stunts – log-rolling, say, while the other team tries to knock the roller off with a water cannon. He was riveted by the camera operators running alongside the competitors, which seemed to him like the best way to have the fun without having to actually roll the log. That interest led him to a sputtering career start as a freelancer in England, a hasty marriage to a Californian who led him to the U.S., a trailing-spouse move to Detroit, green-card permanent residency and, after the marriage fell apart, a career goal finally reached: First, work for a Big Three TV-production shop and then, a job interview at WDIV.

The news director, entranced by his accent, said, “Monty Python,” and the two started trading lines from the classic comedy troupe.

“It went on for a while, but I guess I remembered enough,” Pamplin says. “I got the job.”

Born in an inferno

That was 25 years ago. The Nightcam was born 10 years later, on the first day of summer, 2005. Pamplin was out by himself when he heard an interesting fire call on the scanner, on Piquette Street. He started to head in that direction, and by the time he was drawing near, he could see the orange glow in the sky.

It was the old Studebaker plant, well on its way to becoming the inferno that destroyed it. It was already 10:30 p.m., and by the time he got the tower mast on the truck raised and dialed in, he was still the only reporter on the scene. Anchor Devin Scillian told him they were going live to him and to tell the viewers what he was seeing.

“I ended up freestyling for 20 minutes,” he said. “It was a five-alarm fire.”

Here’s something the reader should know about TV news photographers: Most of them are not front-of-camera material. It’s not simply a matter of not having the looks or grooming skills of the reporters and anchors; they’re different types of people. A lot don’t have journalism training and, more to the point, they don’t want to be on TV, they want to make TV.

“The lens distances you,” Pamplin puts it. It gives a photographer license to poke it into all sorts of situations, but it’s someone else’s job to actually tell the story.

But Pamplin operates in a niche all his own, at least in this market. He cruises for news in the evenings from behind the lens and tells the story, too, without ever being on camera himself. 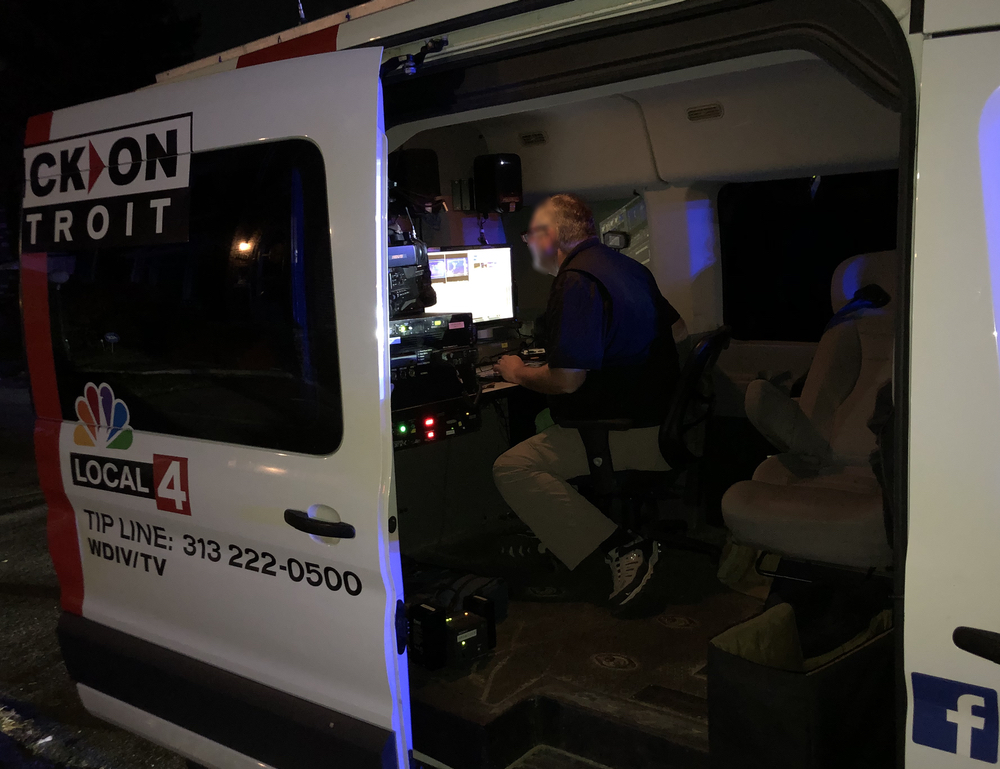 Pamplin, his face blurred, at work on a piece in his parked van (Photo: Nancy Derringer)

“Tim is the photographer I use on my international documentaries,” said Scillian. “We’ve been all over together. He has an amazing and deep curiosity about the world, which is job one of every journalist. He can find something fascinating about almost everything.”

When his boss gave the OK for Deadline to profile him, her only request was that we not show his face. If we had, here’s what you’d see: a 52-year-old man, on the tall side, otherwise physically average, in need of a shave. A bit of belly that doesn’t hamper him from moving fast when he needs to. Reading glasses low on his nose, which he uses to check his phone, his hand-held police/fire scanner, and the computer screen in the back of the Ford Transit he drives everywhere. And the multi-pocket vest every news photographer wears.

What’s not average is his voice and delivery. Besides the accent, which American TV watchers are total suckers for, he brings a noticeable enthusiasm, and that curiosity Scillian admires, to every one of his stories. You know this is a guy doing exactly what he wants to do. He talks fast – it’s amazing how much he can cram into 60 seconds – and can cover everything from a tragedy to a light feature without sounding like he’d rather be elsewhere.

Here he is, investigating sightings of a “crocodile or alligator” on the Clinton River. A big wreck, with security-cam video to supplement Pamplin’s own? No problem. And he was exactly the guy to cover the Fort Street drawbridge-jumper last summer, a story that went international and garnered 1.5 million views.

On the west side, breaking news

So anyway, Pamplin has a feeling about this particular night. After three dry holes, he stops for dinner in Hamtramck, at an immigrant-run takeout spot. Waiting on the order, a customer recognizes his voice and chats him up. (It’s probably best that while Pamplin’s reporting is literally self-effacing, his personality isn’t. It’s hard to drive a rolling billboard around the city and not be noticed.) He orders a New York gyro with extra hot sauce – his favorite “English” food is Indian – but is only a few bites in when the scanner barks: A shooting victim being transported to Henry Ford Hospital is a one-year-old baby.

Off he rolls, toward Tyler Street, in the Russell Woods neighborhood. He arrives first on the scene, and a cop comes over to give a briefing. This being Detroit, the story is equal parts tragic and absurd: An Uber Eats order was mistakenly delivered to the wrong house. The recipient ate this unexpected and paid-for chicken dinner, which upset the original orderer, her neighbor, once she learned what happened. Someone pulled a hammer, which led the hungry party to pull a gun, and in the ensuing melee, a bullet pierced the shooter’s car and struck her own child in the hip.

The neighbors don’t want to talk. The police give a bare-bones sound bite. The shooter’s already on her way to lockup, and the yellow tape is keeping everyone back. But Pamplin gets his shots, including one of the bullet hole from a good 40 yards away, and takes his camera back to the van to put it all together for the 11 p.m. newscast, which it leads.

He starts his voiceover in present tense: “The shooting occurring on the 4000 block of Tyler…” He folds in the police statement as nimbly as a baker handles egg whites, skipping the pathos dragged out of the cop by other reporters, who prodded him to call the incident “disgusting.” A shot of an evidence technician dropping a marker on a child’s car seat is his alone. In one minute and 20 seconds, the story is told.

This new reporting model, which some call the multimedia journalist, is spreading in journalism, as staffs and technology both shrink; an iPhone with an upgraded mic and a decent internet connection is all you really need. Scillian points out Pamplin was a pioneer.

Sometimes, the anchor said, viewers ask why they can never see his face. But they’re missing the point.

“The great thing about these reports is, you’re seeing what he’s seeing,” Scillian said. “He takes you right there. It’s especially suited for breaking news. And he does it better than anyone.”