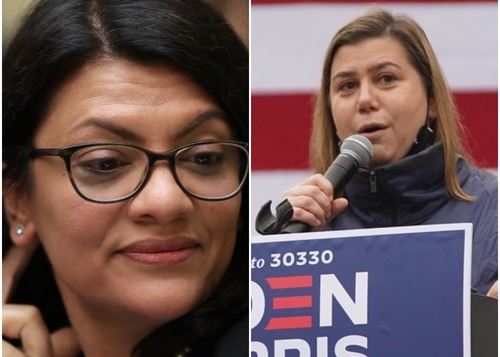 Two Democrat congresswomen from the Detroit area are on opposing sides of a party "civil war" that has reignited following a truce to defeat Donald Trump and the unexpected loss of Congressional seats.

On the left is "squad" member Rashida Tlaib, who represents Michigan's safely Democratic 13th Congressional District, which covers a portion of Detroit. To her right is Elissa Slotkin, who flipped her 8th District seat blue in 2018, even as constituents favored Trump in both of his presidential bids.

The freshman Democrats shared their thoughts on their party's path forward in dueling Politico pieces this week. Their comments followed a contentious House Democrats conference call in which centrists in less-safe seats blamed the left for congressional losses and close calls.

“No one should say ‘defund the police’ ever again,” said Virginia Rep. Abigail Spanberger, who Politico describes as Slotkin’s closest friend in Congress. “Nobody should be talking about socialism."

Those in Tlaib's camp, meanwhile, have blamed the losses in part on Democrats' lack of a bold economic message, pointing to exit polls that showed voters saw Trump as stronger on this front than Biden.

After the call, Tlaib told Politico:

“We're not going to be successful if we're silencing districts like mine ... Me not being able to speak on behalf of many of my neighbors right now, many of which are Black neighbors, means me being silenced. I can't be silent.”

“We are not interested in unity that asks people to sacrifice their freedom and their rights any longer,” said Tlaib, whose Michigan district is among the poorest in the country. “And if we truly want to unify our country, we have to really respect every single voice. We say that so willingly when we talk about Trump supporters, but we don't say that willingly for my Black and brown neighbors and from LGBTQ neighbors or marginalized people.”

Slotkin, meanwhile, whose northern Oakland and Ingham County district is mostly white, took issue with what she seemed to see as virtue signaling by her leftist colleagues, and offered rare praise for Donald Trump.

There does seem to be consensus around the idea of prioritizing pocketbooks to regain an advantage going into the 2022 midterms. But deciding which approach to pursue will likely be messy. Left-wing Democrats have, for example, backed the ambitious Green New Deal, which would create jobs while tackling climate change, whereas Slotkin seems to see the issues as mutually exclusive.

“Today on the radio, someone was talking and they [asked], What do you think Joe Biden’s first thing should be the first 100 days? And the person said climate change,” Slotkin said. She cocked her head to the side. “Now, I can understand that. And I am a big believer that we need pretty bold action to mitigate the impacts of climate change. But if we do not do something that helps people’s pocketbooks or their kids in the first couple of months, I think people are going to lose faith in government being able to do anything in their lives.”