The Trump campaign is withdrawning a federal lawsuit challenging Michigan's election results, but that doesn't mean it's accepting defeat. 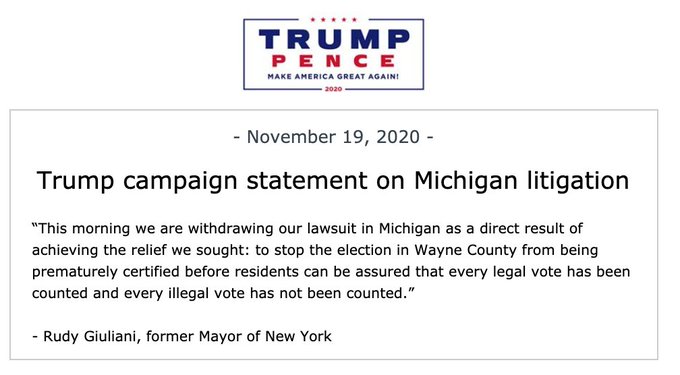 In a confusing Thursday statement that seemed to falsely suggest the certification of votes in the state's most Democratic county had been halted, Trump lawyer Rudy Giuliani said the suit was pulled because the campaign had achieved “the relief we sought: to stop the election in Wayne County from being prematurely certified before residents can be assured that every legal vote has been counted and every illegal vote has not been counted.”

In a court motion filed Thursday, Trump attorney Mark Hearne said the  board had “met and declined to certify results of the presidential election," Bridge Michigan reports.

The Wayne County Board of Canvassers, in a stunning move that drew national condemnation, on Tuesday did briefly fail to certify the county's election results when its two GOP members seized on the recurring, but largely inconsequential issue of imbalanced poll books in Detroit. The commissioners later changed course, voting unanimously to certify the results with the caveat that the Secretary of State to look into the issue of imbalanced poll books in Detroit.

Since then they've said they want to rescind their approval, but Democrats and legal experts say that's not possible.

The state board of canvassers will vote on whether to certify the state's election results Monday. That board is also made up of two Democrats and two Repulicans, one of whom has told Bridge Michigan he may not certify the results amid unfounded allegations of fraud by the Trump campaign.