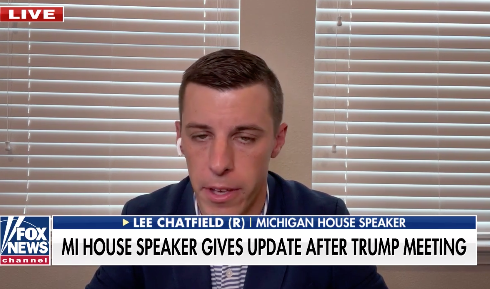 Republican Michigan House Speaker Lee Chatfield, who met with President Trump on Friday, said Sunday he can't rule out a state Board of Canvassers impasse on certifying the vote, which would result in a constitutional crisis.

In an appearance on "Fox & Friends" on Sunday, Chatfield said he'd prefer not to reach a constitutional crisis, though he said allegations of voter fraud need to be investigated.

The board is scheduled to vote Monday during an online public meeting that starts at 1 p.m. Some Republicans insist there is time to delay the vote, investigate and still certify by the Dec. 8 deadline to finalize appointments of the state's 16 Electoral College vote-casters.

"If there were to be a 2-2 split on the State Board of Canvassers, it would then go to the Michigan Supreme Court to determine what their response would be, what their order would be," Chatfield said. "If they didn't have an order that it be certified, well now we have a constitutional crisis in the state of Michigan. It's never occurred before."

The prevailing thought among legal experts is that the court would force the certification if necessary. It would likely end up before the state Supreme Court.

Chatfield insisted that Trump did not ask him to do anything improper, and that they talked about Covid aid to Michigan.

As I've repeatedly said, our election process MUST be free of intimidation and threats. Whether the Board of Canvassers certifies our results tomorrow or decides to take the full time allowed by law to perform their duties, it's inappropriate for anyone to exert pressure on them.