Michigan Board of State Canvassers certifies win for Biden 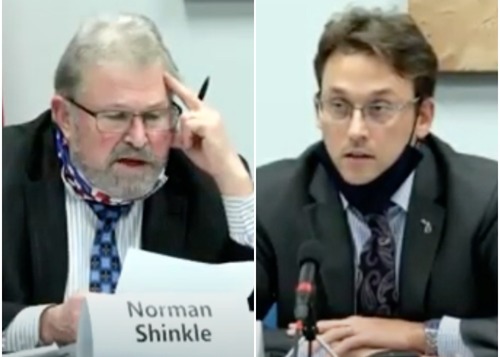 Norman Shinkle and Aaron Van Langevelde, the Republicans on the  board.

The Board of State Canvassers voted 3-0 to certify the election results in a highly anticipated meeting Monday, capping weeks of uncertainty over whether it would uphold the will of voters amid widely discredited claims of election fraud leveled by the Trump campaign.

Biden defeated President Donald Trump by at least 155,000 votes in Michigan. But Norman Shinkle, a GOP member of the four-member canvassing board, had warned he might vote against certifying those results after his wife observed "a lot of strange things going on" as a GOP poll challenger at the TCF Center in Detroit.

On Monday, he abstained from voting, saying, "I do not plan on voting for certification. I believe Wayne County's certification process needs to be looked at and I think there are serious problems with it."

He also requested that the state legislature conduct an in-depth review of Michigan's election processes and procedures.

Election officials told the board its only duty Monday was to certify results already approved by the state's 83 county canvassing boards. The state board has unanimously approved all election results in the past.

In Wayne County, however, two GOP canvassers on the four-member board last week moved to rescind their approval after learning an audit they'd requested into apparently inaccurate information recorded in Detroit poll books could not begin until after the state's results were certified, as per state law. The canvassers also received a call from Trump.

Shinkle, whose wife also served as a witness in one of Trump's lawsuits, zeroed in on the recurring problem of imbalanced poll books in Detroit — meaning the number of voters tracked does not match the number of ballots cast, potentially preventing a recount. Less than 30 percent of Detroit precincts were imbalanced in November, down about 50 percent from four years ago, when Trump did not raise issues and the election results were certified in his favor.

More than 35,000 at one point tuned in to watch the more than three-hour meeting on YouTube and more than 800 requested to speak. Many public commenters vouched for the integrity of the election and urged the board not to disenfranchise the state's more than 5 million voters.

Republican commenters including Michigan party chair Laura Cox and and an attorney for John James urged the board delay certification until an audit could be conducted into issues in Detroit. But election officials repeatedly said it was not within the board's authority to investigate or seek audits and that, by law, one could only occur after the election was certified.

Republican canvasser Aaron Van Langevelde agreed the board could only vote on the election results.

"The board has such limited authority, I don't see anything where we're given the authority to act as a court of law or act as a prosecutorial agency," he said, adding that their only role in elections was to could only review election returns from the counties.