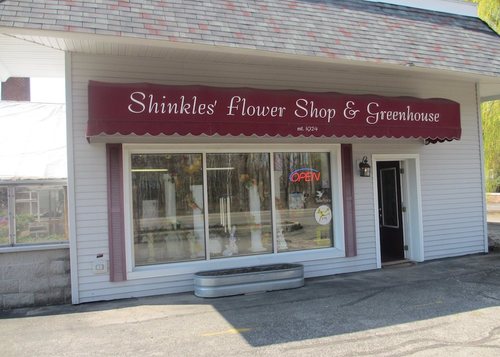 It's not a good day to be related to Norman Shinkle. The Michigan canvasser who broke with historic precedent to abstain from certifying the state's election results Monday has said he and his family faced harassment and even threats after he promised to consider widely discredited claims of election fraud in making his vote.

But pro-democracy trolls have also, more curiously, laid their crosshairs on another Norm-related target: His brother's flowershop. 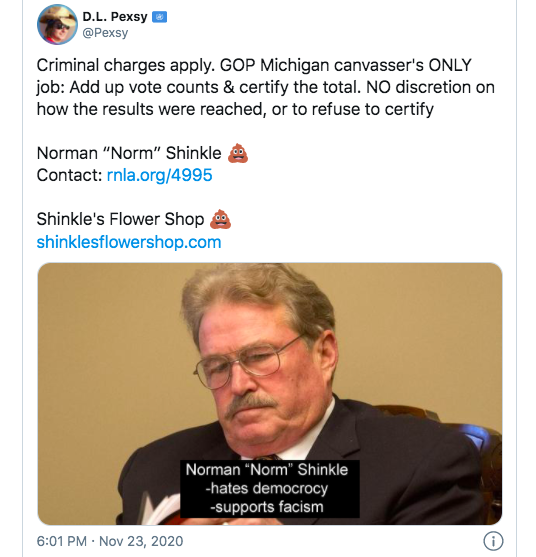 The apparent call-to-action did not make clear that Norman Shinkle does not own the shop.

Since Shinkle's vote, the flowershop and greenhouse that bears his family name near the Ohio border has been hit with a flurry of one-star Google reviews, after it was mentioned in tweets critical of the canvasser.

Though the effort seems to have missed its intended target, some comments are devastatingly clever:

"Replaced my order with one the florist wanted, even though I did everything correctly. Said it was because I was black, from Detroit and didn't know what I was doing."

"Never ever buy flowers or order flowers from here. They intend to disenfranchise (deprive you of expressing) your feelings or sentiment but still take your money."

"Tried to order flowers from Norm and despite a clear order form he delayed my order by making up some fake complaints about how I wrote my order slip. When asked for proof of his claims he could not provide them but was intent on destabilizing the florist industry with false claims of order slip wrong doing. I still await proof of his complaints to validate his trying to throw out my order, and so many more. If you ask me, Font Size Norm is coup-coup."

"This is a difficult review to write. I originally thought that shinkle Flower shop was the sort of shop that would deliberately sabotage the entire basis of the flower industry. You know, putting rotting flowers into an arrangement and that sort of thing. But I have since come to realize that, they are more the sort of flower shop that abstains from doing a very simple clear-cut job that is snipping the ends off the stems, putting some flower food in the vase and arranging the flowers nicely. So I think if you want flowers where the florist can actually do his clearly defined job, it’s best to look elsewhere. I will abstain from buying flowers here, but I do think they could do their job justice if they wanted to."

A relative of Shinkle's tells the Free Press Norm has nothing to do with the shop, owned by his brother Gary and wife Suzanne.

Fortunately for the couple, the bad reviews have been countered over the past several hours with a series of five-star ratings. As of early Tuesday afternoon, the shop was holding on to 3.4 stars.