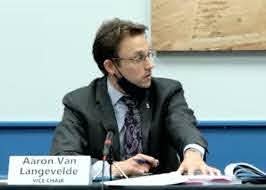 Aaron Van Langevelde isn't exactly a household name. He's the Republican vice chair of the Michigan Board of Canvassers and is a lawyer who works for GOP in the statehouse, giving legal guidance.

But he got some national notoriety after he defied President Trump and his party's wishes Monday to delay certification of Michigan's election.  Instead, he voted with Democrats to certify. Lageveide made it clear during a hearing that the board's only legal path was to certify the vote.

The board, which has two Democrats and two Republicans, voted 3-0. His Republican colleague,  Norman Shinkle, straddled the line, and ended up abstaining, tossing his party an empty gesture.

Now, Van Langevelde is the subject of an article in Politco titled: "The Michigan Republican who stopped Trump." The article by Tim Alberta  states:

That’s right. In the end, it wasn’t a senator or a judge or a general who stood up to the leader of the free world. There was no dramatic, made-for-Hollywood collision of cosmic egos. Rather, the death knell of Trump’s presidency was sounded by a baby-faced lawyer, looking over his glasses on a grainy Zoom feed on a gloomy Monday afternoon, reading from a statement that reflected a courage and moral clarity that has gone AWOL from his party, pleading with the tens of thousands of people watching online to understand that some lines can never be uncrossed.

“We must not attempt to exercise power we simply don’t have,” declared Van Langevelde, a member of Michigan’s board of state canvassers, the ministerial body with sole authority to make official Joe Biden’s victory over Trump. “As John Adams once said, we are a government of laws, not men. This board needs to adhere to that principle here today. This board must do its part to uphold the rule of law and comply with our legal duty to certify this election.”

The article goes on to heap praise on Langevelde, saying his vote was remarkable considering the pressure from the GOP to delay certification.

"An obscure lawyer from West Michigan etched his name into history by standing on principle. It proved to be the nail in Trump’s coffin: Shortly after Michigan’s vote to certify, the General Services Administration finally commenced the official transition of power and Trump tweeted out a statement affirming the move “in the best interest of our Country.”