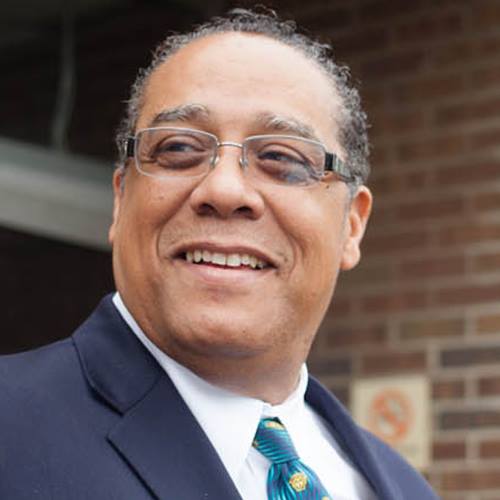 "Many have inquired about how my dad is doing," Jackson writes. "He’s holding pretty steady since my last update. He is still on the ventilator but doing well. This virus brings ups and downs but we, along with the doctors and nurses, remain hopeful and optimistic that he will make a full recovery."

Wayne County Sheriff Benny Napoleon, hospitalized a week ago for Covid, has been placed on a ventilator, multiple people familiar with his case said Saturday.

Napoleon, 65, initiallly experienced mild conditions a little over a week ago.

"Friends, as many of you may have heard, I recently tested positive for Covid-19. I’m experiencing very mild symptoms; my spirits are high and my faith is strong. As always, I appreciate your prayers and support. To God be the glory!"

Shortly after that he was admitted to a Detroit hospital, where he remains.

Deadline Detroit first reported about the ventilator early Saturday evening. Hours later, his daughter Tiffani Jackson explained on Facebook that her father was placed on a ventilator Friday to slow his breathing.

She insisted the use of a ventilator doesn't mean his condition was worsening, contrary to the original report in Deadline Detroit that sources suggested the breathing machine was a sign that his condition had declined.

"Last night, the doctors placed my father on a ventilator to assist him with slowing his breathing and allowing his body to begin healing. He still has the ability to breath(e) on his own, however, he needs time to rest because his body was working extremely too hard. My father was alert and played an intricate part in making the decision to be placed on the ventilator."

"We are not hopeless. We still have hope in the ultimate physician; Jesus. This is not the end! Our God's Word cannot return void."

Normally, before installing a ventilator, a patient is given a general anesthesia. Then a tube is placed into the mouth or nose and snaked into the windpipe. Some are on a ventilator for a few hours, while others may require one to three weeks or longer, according to Yale Medicine.

Unlike in the beginning of the pandemic, some doctors are trying more alternatives before placing a patient on a ventilator.

As of Friday, 4,068 adults statewide were hospitalized with confirmed or suspected Covid infections -- including 472 on ventilators (11.6 percent).

Napoleon's brother Hilton Napoleon, ex-chief of Highland Park Police was hospitalized with the virus earlier this year and spent many weeks on a ventilator. Many thought he woudn't make it. "I had a collapsed lung, kidney failure and pneumonia," he told Fox 2 in May.

Benny Napoleon was just re-elected in November to a four-year term as sheriff. He ran unopposed.