Sadly, My Father's Ex-Detroit Bar With the Iconic Mural 'Our Land Til Death' is Slated for Demolition 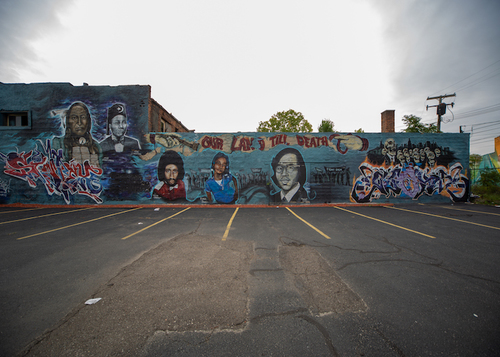 I was sad to read in Metro Times that the building that once housed my father’s bar, the Strand Lounge at 4641 Grand River in Detroit, is slated to be demolished next month. The place always had a sentimental place in my heart, having gone down there in junior high on Sunday mornings to help clean up before the noon opening.

My father sold the bar in 1968, a year after the riots, and it probably shut for good about five or six years later. At one point, it became a motorcycle club and later a storage place for a mechanic's car parts. The building has now been deemed a dangerous structure by the city.

For quite a while the vacant building with no roof stood out because of an iconic mural on its side, “Our Land Til Death,” which paid homage to victims in the community who died of grave injustices. People on the wall include Malice Green, beaten in 1992 by two Detroit cops, Aiyana Jones, 9, shot by Detroit Police in 2010, and Vincent Chin, beaten by two white men in 1982.

On the upside, muralist Sintex has been tapped by Allied Media Project to recreate and update his art for its new headquarters at the site, which also includes an adjoining property.

"It's cool that they want to actually recreate it," Sintex tells Metro Times editor Lee DeVito. "Some of the murals come down, and they just come down. A lot of people remember them and have pictures of them, but it's cool when they can be recreated.

In July 2017 -- several months after my father died at age 97 -- I did a video for Deadline Detroit in front of the mural to commemorate the 50th anniversary of the 1967 rebellion.