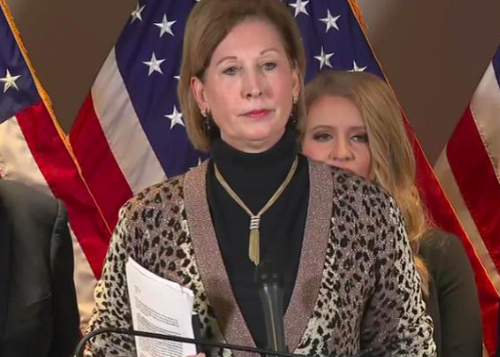 The lawyer Trump fired for being too conspiratorial for even him is now apparently working to overturn Michigan's election results pro bono.

Sidney Powell has filed another suit alleging "widespread fraud and misconduct that judges in the state and across the country have previously rejected," as per the Free Press, this time in federal court in the state's Eastern District.

The Trump campaign distanced itself from Powell a week ago, saying she does not work for it or the president in any capacity. In response, Powell promised to continue her bogus crusade anyway.

Her new filing cites "cause for concern" about vote distributions that "indicate fraud" in Edison County, which doesn't exist in Michigan.

The 65-year-old ex-prosecutor appeared on stage with still-employed Trump lawyer Rudy Giuliani earlier this month when his hair dye melted, airing so many conspiracy theories she was virtually incomprehensible. One claim involved election interference by late Venezuelan president Hugo Chávez.

There's no evidence of widespread fraud in Nov. 3 election. Michigan's election was certified last week, with Joe Biden winning by more than 150,000 votes.